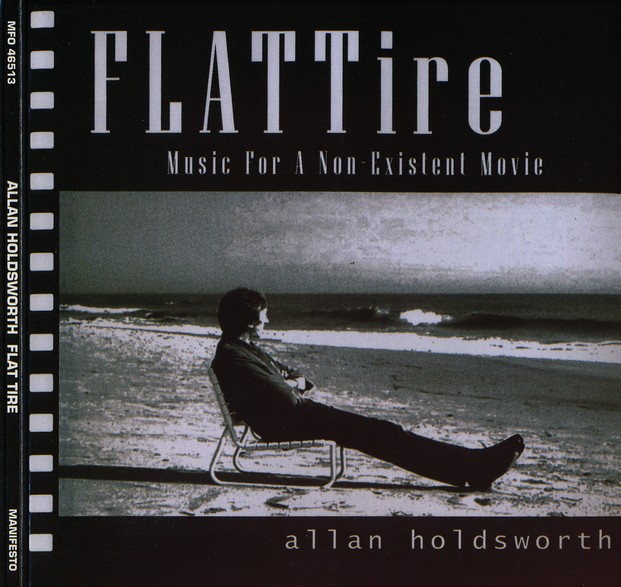 Due to a "domestic upheaval", Allan found himself without recording facilities after the turn of the millennium. Partly due to logistical reasons, this situation resulted in an album concentrated around the SynthAxe. This allowed Allan to explore some new textural ideas in his compositions.


"In the past I had thought about it (a SynthAxe album), but I was focusing on group projects, so, although I wanted to do it, I just never had the opportunity. When I found myself with the time to do it between projects, I went for it. It did change something in my writing. I could play sustained chords, and with the breath controller I could play long notes and make them loud or soft, make them go away then bring them back, just like you can on a real wind instrument. I could turn it into a non-percussive instrument (whereas the guitar is a percussive instrument). So overall, I would say it  gave me more flexibility." (59)

The sub-title, "Music For A Non-Existent Movie", also signals that this album has a stronger textural element, with specific "scenic" images in mind.


"I always liked the idea of trying to create music for movies and through my experiences of the last 18 months, "The Movie" - "Flat Tire" - was made, hence the subtitle "Music For A Non-Existent Movie"... I would love to make music to pictures, because that is essentially what I do anyway. If I have an idea for a song or a title of a song, I have some sort of  picture in my mind. So yeah, I would love to do film music. I would really like to do a sci-fi movie, I would be really good at that." (album liner notes, 59)

Assembled in his home studio, the only guest performer on this release was Dave Carpenter (acoustic bassist from The Sixteen Men of Tain) who joined Allan on just two tracks (and possibly more uncredited). A few tracks (1, 2, 5, 6) have drums which Allan programmed on his Alesis HR-16. Sonically, Allan's palette of SynthAxe sounds had a stronger Yamaha flavor to them this time, since most of the Oberheim synthesizer modules used for Atavachron and Sand had been sold off.


"The ones that were like the more orchestrated pieces, there was no click. There was only a click for the tunes that had...like time on them. Like "Eeny Meeny" and "Bo Peep", where Dave Carpenter played bass on... I have an ancient old Atari 1040 Ste. It works good for many because I like the Steinberg software, it was good. I just used it because I started with the PRO 24 which worked just like a tape recorder. That's the way I like to use it. And Cubase was really easy to do that, even though it took me a while to switch from SP24 to Cubase... (For synth modules) usually I use old YAMAHA DX7s and two TX816s, five TX7s and a YAMAHA VL70. (58, 57)

One way to appreciate this album is to see it as a 20th Century sequel to Sand. Allan had grown in his ideas about harmony and song structure since the 1987 album, and Flat Tire gave him a chance to revisit this somewhat "classical" arena. His chordal work here also explored some new brass and piano timbres (sometimes layered through overdubs), and his solos used patches with a sharper attack than in the past.