Iridium July 7th, 2017: A Celebration of the Life and Music of Allan Holdsworth 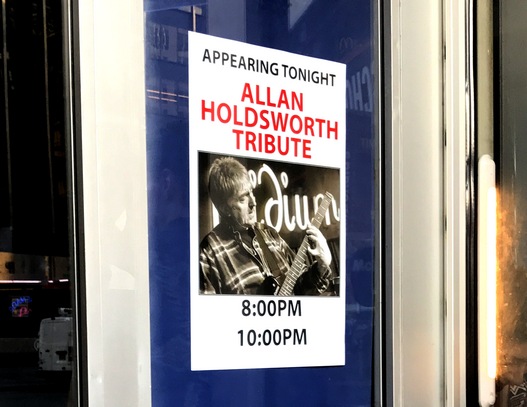 On July 7th, 2017, I attended the 3rd and last night of the “Tribute to Allan Holdsworth” at the Iridium club in New York City. Allan was scheduled to play from July 5-7, but after his unexpected passing the dates were re-purposed into a 3-night tribute to Allan’s songs featuring Allan’s final live band supporting several guest guitarists (most of whom who had worked with Allan in some capacity or been deeply inspired by him).

Drummer Virgil Donati (“Planet X”) more or less MC’d the evening, with the remaining rhythm section consisting of keyboardist Steve Hunt (member of Allan’s '90s Secrets to Hard Hat Area band) and EDM/fusion bassist Evan Marien (“EMAR”). The atmosphere in the full house was very reverent, but at the same time celebratory. I was pleased at the huge turnout despite the absence of the 'main man' himself, which attests to the legacy of the Holdsworth songbook. Of course, having a fantastic line up of nine of the best musicians on the planet performing at the top of their game and interpreting the most advanced jazz book of the 21st Century didn’t hurt either.

The first night of this Holdsworth musical-portrait triptych had Allan’s longtime bassist Jimmy Johnson guesting (which I sadly missed), but this final night had Allan’s daughters (Lynne, Louise and Emily) in attendance, which also made the evening very special to the players, I’m sure. No doubt Allan was in the crowd in spirit, looking on with great satisfaction and awe at how music was being carried forward.

The first two songs, “Mr. Spock” (from Tony Williams Lifetime album Believe It) and “Non-Brewed Condiment” (from Atavachron), featured Nir Felder on guitar, playing a sunburst Stratocaster and employing a clear, clean tone for his solos. Nir is relatively new on the scene, but has been hailed as one of the bright new lights in jazz guitar of the last few years, with his debut album “Golden Age” released in 2010 on Sony/Okeh (and a new album expected shortly). The highlights of these first couple numbers included Donati’s drum solo/guitar vamp on “Spock”, and Felder’s solos, which were perfect examples of blowing through Holdsworthian song changes but retaining one's own guitar style (which all of the players essentially did, but Nir’s opening leads clearly put a flag in the ground). Steve Hunt also contributed classic electric piano and synth solos to these songs, employing a breath-controller on the synth sometimes. As the “senior” member of the group, Hunt provided a solid link to Allan’s songs from the previous millennium.

After “Non-Brewed Condiment”, Felder left the stage and Alex Machacek appeared. Machacek hails from Austria, and his style has also been inspired by Allan’s playing. Besides his solo albums (“[Sic]”, etc...], Machacek has also performed with Allan’s former U.K. band-mate Eddie Jobson, as well as Donati. Machacek was tonight featured in “Material Real” (from Road Games) and “Looking Glass” (Atavachron), with the volume swell intro to “Material” being faithfully reproduced by Alex, and the melody line carried by Steve Hunt’s keys and vocals. Hunt then presented his rendition of the intro to “Mr. Berwell”, followed by the full band on “Looking Glass” which featured a burning solo by Alex.

Tim Miller (renowned guitar mentor and featured on the Tim Miller Trio (and Trio Volume 2) then appeared and performed passionate versions of “Texas” (from The Sixteen Men of Tain) and “Pud Wud” (Sand). His tone on this first set seemed a bit under-mixed (from my seat, anyways), so it was sometimes hard to hear every articulation, but his sound soared in the second set (described later). In any case he navigated the songs in his own style, honoring the compositions’ thorny harmonies and rhythms, but putting his own stamp on them. “Pud Wud” also featured a brilliant solo from Evan Marien, who blew through the changes with melodic brilliance.

Next up was Testament guitarist Alex Skolnick (also with heavy credentials in the jazz-fusion/global music world with The Alex Skolnick Trio, Stu Hamm/Chad Wackerman, Jane Getter Premonition, etc). He opened with a hard-hitting version of “Red Alert” (Lifetime Believe It) and a snarling solo flight. Afterwards, vocalist Irwin Thomas (Donati band-mate) joined Skolnick and the rest with a rendition of “Metal Fatigue” which brought the house down (in this case Skolnick respectfully based his solo mostly on Allan's melodic album take).

Set 1
After a short break, the second set followed, and down below are some brief notes on the proceedings. A notable guest on the second set was guitarist Jamie Glaser, who had just come off of touring with Allan’s old collaborator Jean-Luc Ponty. His duet with Steve Hunt on “Norwegian Wood” (a Beatles tune covered by Allan on None Too Soon) was possibly the emotional high-point of the second set.

Set 2
Final thoughts: Allan’s presence was obviously missed by all (both sonically and personally), but this 3 hour concert of concentrated musical dialogue was a huge success as far as honoring Allan’s legacy and firmly introducing his compositions into the jazz repertoire. It was clear that these tunes are among the most difficult (harmonically and rhythmically) ever presented to an improvising musician, but it also reminded me of stories of the challenges encountered when Coltrane’s “Giant Steps” and Stravinsky’s “Rite of Spring” were first presented ("Eruption", etc...). Nowadays, those pieces are firmly entrenched among the classics and are popular among the more adventurous improvisors and orchestras of today, both in class and on stage. One can expect classic Holdsworth tunes to be similarly absorbed into the fabric of modern music in the future (hopefully!).
Photos: Motoko Shimizu and Ed Chang

Many more photos (as well as a couple brief video clips of Skolnick's "Metal Fatigue" and Machacek's "Devil Take the Hindmost") can be seen here.