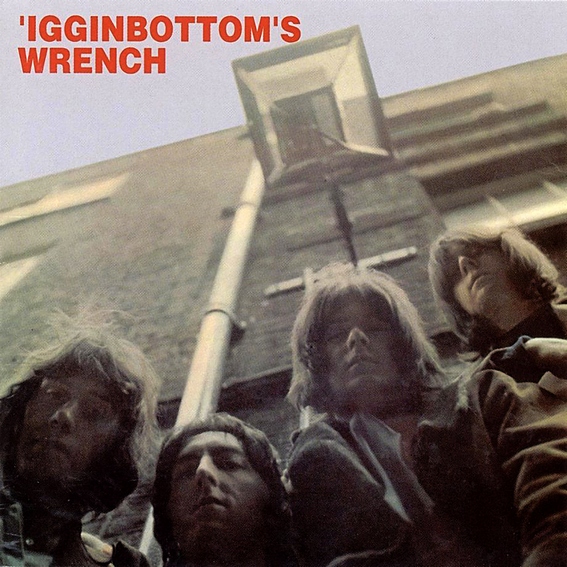 As the 60's drew to a close, Allan found himself "mentoring" and playing in a local Bradford band with guitarist Steve Robinson. At this point in his harmonic explorations, Allan had already created his own chordal language, separate from that taught in traditional guitar instruction books. By "following his own nose", Allan had come across new voicings for old chords, and created new chords by layering two simpler chords on top of each other. These "polychords" were explored with the addition of Steve's 6-string in rehearsals with bassist Mick Skelly and drummer Dave Freeman. Allan also introduced to Steve the "sheets of sound" soloing style he had first heard on Coltrane's records.

"There were 2 guitar players in the band, Steve Robinson and myself, and what we used to try to do (which was a very good idea, it’s just that we weren’t very good at it…) was that we played, like, polychords. I’d play 4 notes, and he would play 4 different notes, and every chord was usually like an 8-note chord, which was unusual for the guitar, and we’d work on it. Some of the ideas were pretty good, it’s just that we couldn’t play..."  (48)

Through Steve's friendship with Mick Jackson (vocalist/bassist from the band "The Love Affair"), the band (now 3 months old, and dubbed 'Igginbottom at Jackson's suggestion) was featured at Ronnie Scott's Jazz Club in Soho London during a "guitar festival" (with classical guitarist John Williams and jazz guitarist Barney Kessel also on the bill).


“I gazed agape as waves of complex, Debussy-ish chords washed over me. My eyes grew wider as I watched the incredible interplay between Allan’s and Steve’s guitars, often sounding like one guitar playing a massively-complex chord on 12 strings. And it wasn’t as if Allan couldn’t be massively complex by himself - if he couldn’t stretch his left hand wide enough to execute one of his unique chords, no problem – use the right hand as well to hold down one or more strings and then strum the chord with his little finger – all done in a flash during a fast moving series of chord changes. Then there were those wonderful, long, fluid solos from Allan and Steve, brilliantly displaying their love for Coltrane. All of this supported with rare grace and sensitivity by Dave’s drums and Mick’s bass, delicate brushes and mallets and slides and tremolos, reminding me of the mid-1950s Chico Hamilton Quartet."

After 'Igginbottom's successful live debut in London, an album was recorded and released on Deram Records (a sub-label of Decca). Unfortunately the studio process was a bit rocky at times:


"I had an AC30 (Vox)* and a Gibson SG, and I used to like to turn up the amp until it was right at that point where it would get real throaty and fat, but without a ton of distortion. So we started playing, and the engineer came in shaking his head saying, 'No, no, no. This is all wrong. You turn the amp down, and we turn it up in the control room.' And I'm screaming, 'No, you don't understand. I want you to record this sound.' This would go on for hours, and it would drive me crazy. I couldn't figure out why I liked my sound at gigs, but hated it every time it was recorded." (61) 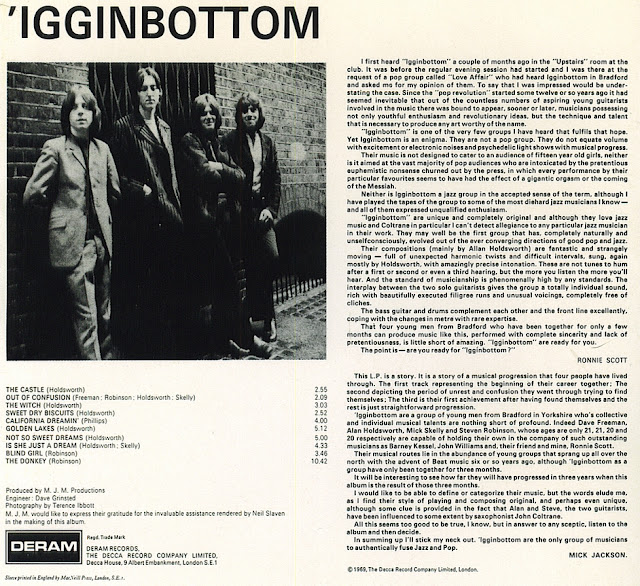 *Michael (Mick) Skelly reports that he only recalls seeing Allan with a Marshall amp at this time.  He also adds that the record was recorded in one night, live to tape, with the vocals added the following night.


"'Igginbottom's Wrench" Analysis:
In the breakdown below Allan is in the left guitar channel and Steve Robinson is in the right.

"'Igginbottom's Wrench" was most recently reissued with new liner notes on Angel Air records in 2000. Though this CD is out of print, the album can be found through secondary markets or on YouTube.

The Glen South Band
For some reason, 'Igginbottom never quite took off, and the band broke up. Allan then took a step back (musically-speaking, anyways) and embarked on three years with the 12-piece Glen South Band (first playing the Mecca Sunderland circuit and then later the Ritz in Manchester), covering Top 40 tunes and/or providing background dance music, depending on the gig.


"He gave me quite a lot of freedom in that band. There were generally two solos in every song - we had to eke them out back then. I always played the first solo as it was on the record, but for the second solo Glen used to let me do my own thing. It was good also, because I had all that time during the day to practice..." (29)

About two years into this "cover band" career, Allan would find himself rediscovered by visiting Londoner Ray Warleigh at a Musicians Union clinic...

Next: The London Jazz Scene
Previously: Prelude, with Debussy and Coltrane