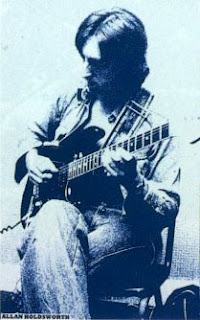 (Originally from Chapter 25, but broken out here for ease of access.)

Just For the Curious
In his 1993 video (with supplemental book and CD), Allan talks about his favorite scales and some of his ideas about chord-melody composition. Several song selections are played live in the studio with Allan joined by drummer Chad Wackerman, bassist Skúli Sverrisson and keyboardist Steve Hunt. Unfortunately, the recording process for these sessions had some engineering issues. Nonetheless, the package was released (and is still in print), although Allan was sorely disappointed in the outcome (sonically, at least).

Scalar Concepts
In the instructional portion of the video, Allan describes his 10 "most usable" scales. In his mind, he transposes his scale shapes to the nearest Dorian mode shape (which is always - and confusingly - referred to as "the minor scale" in the lessons). The related modes don't matter, since he files every mode for a scale under one umbrella name. The 10 sequences below give varying "flavors" to play with, and you can fit these scales over various kinds of chords to get different effects. The first 4 scales have 7 notes each (like most diatonic scales). Scales 6-9 have 8 notes. Scales 5 and 11 are symmetrical scales, and so are extra "atonal". All of these scales are meant to be transposed to whatever tonic key is appropriate for the underlying chord harmony.


This above transcription of Allan's original notes shows the scales he would use for the solo section of "Tokyo Dream" (from Road Games). For this tune, he mostly uses the Dorian mode (minor scale), modulating to a new key for each chord. A D diminished scale pops up in the turnaround cadence (it's listed 4 times on top of each other with different notes to indicate their interchangeable roots). The "x II" represents a repeat. The "F#x/E" and the "A/Bx" indicate two places where different modes of the same scale can be used. The symbols at the bottom row are probably alternate scales, since they don't seem to be part of the primary solo harmony (I think). The original "Just For the Curious" book/CD (edited by Aaron Stang) has 5 additional scales, including the whole tone scale and a few additional 8 and 9-note scales.

Chord Concepts
In the section relating to chordal concepts and chord-melody composition, Allan explains how he can create a chord family by selecting 3 or 4 notes from a particular scale and then move all of the notes in the chord up (or down) simultaneously along the "permitted notes" in the scale pattern. This results in other chords found in that scale (each beginning with a different scale tone and using that voicing). Naturally, the original scale could be used for any song composed using these 8 (or whatever) chords, with the chord tones emphasized for each chord.

Allan explains that he thinks of each chord as representative notes from a particular "family" of notes (a scale). So, when chords go by (during a solo improvisation), he decides which family (scale) would be appropriate for a given chord, and adjusts his note choices accordingly. He also suggests (probably in relation to comping) that a chord can be "enriched" by substituting it with different inversions of itself, or with related chords found in the same key (ie - from a scale which contains the same notes). This is typically demonstrated whenever Allan is playing "rhythm guitar" underneath a bass or keyboard solo.

The video/CD/DVD/book package is nicely assembled, and the book which comes with the package includes many examples, exercises and song transcriptions to illustrate Allan's thoughts. Sadly, Allan never made a second volume, which probably would have gone into his ideas about poly-tonal soloing and harmonic modulation in song composition (not to mention his rhythmic ideas).

Add comment
Load more...
Home
Subscribe to: Posts (Atom)
"(For each composition) I like to have a specific thing that happens more or less in that tune alone, and is not found consistently in any of the other ones.