23: The Jazz-Rock Gunslinger: Truth In Shredding, Heavy Machinery, and More

Allan Holdsworth first met guitarist Frank Gambale while his own band was sharing tour dates with the Chick Corea Elektric Band (who Frank was playing with at the time). They ultimately cultivated a lifelong mutual admiration for each other's playing. Gambale made his initial mark on the guitar scene through his dazzling displays of sweep-picking technique (essentially runs employing rapid, cleanly-articulated arpeggio figures and large interval leaps) as well as his usage of modal harmony in his electric jazz explorations. Producer Mark Varney (brother to Mike Varney, who had helped I.O.U. when they first arrived in California) had Gambale prepare an album of modern fusion "standards" with a live band, leaving room for Allan's solos to be overdubbed at Allan's home studio, The Brewery. Allan ended up contributing four guitar solos and three SynthAxe solos, and mixed the entire album. This was released in 1991 as MVP: The Mark Varney Project: Truth in Shredding. A great interview with Mark Varney reminiscing about that period can be read here. The grooves on this album are generally uptempo and swing-based, but with an electric edge. 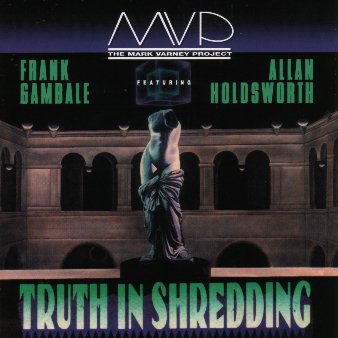 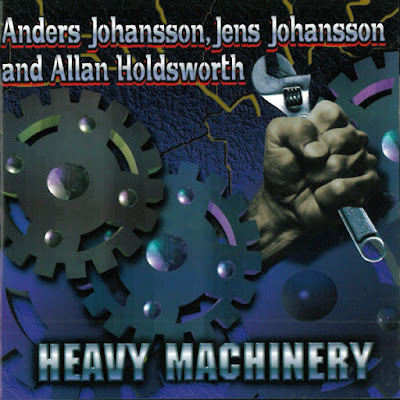 A similarly-assembled record was Allan's collaboration with keyboardist Jens Johansson and drummer Anders Johansson (from neo-classical shred guitarist Yngwie J. Malmsteen's band, Rising Force). However in this case, all of the compositions were composed by Jens Johansson. As with the the Truth In Shredding album, Allan added his solos to the Johanssons' rhythm tracks at his own studio. A good interview with Jens Johansson about the making of this record can be found here. 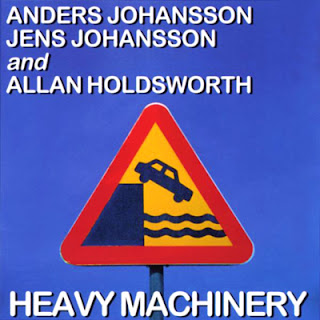 If None Too Soon was Allan's "jazz standards" album, and Truth In Shredding his "fusion standards" album, then Heavy Machinery is essentially his "prog/boogie rock" album. The solo accompaniments here are mostly based on modal pedal vamps or blues progressions, so it's interesting to hear Allan apply his ideas to this environment. His playing here hadn't really been this "bluesy" since the Tempest days. The Japanese release also has a bonus track, but Allan doesn't play guitar on it. It's hard to tell if any SynthAxe is on the record, but none of the synth leads sound like Allan at least. 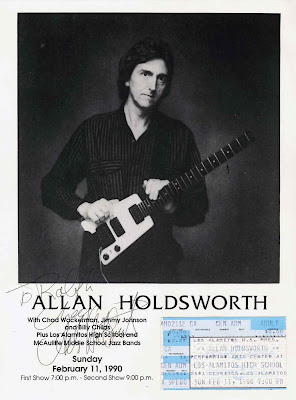 Some other albums including Allan's contributions from around this period (and from many different genres) are annotated below (regarding Allan's guitar/SynthAxe parts). For example, the earlier "SOMA" album (1986) featured Allan in his pre-Atavachron days sitting in on progressive rock/pop songs, at times reminiscent of Frank Zappa or Asia. Allan's lead guitar can be heard on five tracks, but "The Grand Pajandrum" has the most substantial Holdsworth soloing on the album.

Additionally, in the early '90s, long-time I.O.U. drummer Gary Husband was playing with fusion-pop band Level 42, led by slap bassist Mark King. Through this connection, Allan was engaged to record guitar parts for the album Guaranteed, and joined them on a few UK dates while they looked for a new permanent guitarist (ultimately Jakko Jakszyk). The 2nd half of a radio broadcast of one 1990 Hammersmith Holdsworth-assisted show can be found online.