In the summer of 1972, Jon Hiseman (Colosseum, John Mayall) decided to form a new "heavy rock" band. He had first heard of Allan Holdsworth through trombonist Derek Wadsworth, who had seen Allan play at the Newcastle Musicians Union clinic with Ray Warleigh. Hiseman then got a closer look at him when he produced Ian Carr's "Belladonna" in July of 1972.


Hiseman: "I began thinking of forming a four-piece...the problem was finding someone who was pretty ridiculous but not too well known because, to be realistic, I couldn't see a biggie from a top-flight band dropping everything to join us. It was an almost insoluble problem, and then I began hearing rumors about this lunatic guitarist who was just unbelievable. I got word that he was in London and he came round to my place. After he'd played for ten minutes I knew he was right." - Disc, Jan 1973

Filling out this quartet was Mark Clarke (from Hiseman's old band Colosseum) and singer Paul Williams (from Juicy Lucy, and later, vocalist for Allan's I.O.U. solo project). Allan recorded Tempest's self-titled debut in November using Gibson ES-335 and ES-175 semi-hollow body electrics (possibly after trying out Paul Williams' Gibson guitar), although one photo (from Jon Hiseman's book) also shows Allan holding a Les Paul. Allan contributed parts to most of the songs, but this was clearly Hiseman's project. As a side note, this record also marks Allan's first recorded violin solo, which actually had it's genesis during the previous year's Glen South Band gigs:


"I just went into a music store in Sunderland when I was playing with that Glen South band and I don't know why, I was just walking past a junk shop and went in and asked him if he had any old violins. I didn't see anything - and he went in the back and he came out with this thing - no strings. And it was like 10 shillings or something - no, it was 5 quid. So I fixed it up and got a new bridge made for it and strung it up...My violin style is derived from the guitar. I developed a four finger left hand technique anyway."  (40, 9)

After a final session with Ian Carr's Nucleus (for BBC radio), Allan joined Tempest on a European winter tour, with an American tour (supporting Fleetwood Mac) following in March of 1973. These were essentially Allan's first real tour experiences, and his first trip to the US (on tour at least).


By early summer however, change was again in the air:


"I had envisioned it as something that would progress... I believed that there was room for the music to grow, but Jon wanted it to go the other way...he thought of it as not being commercial enough. He wanted me to play more like somebody else, and I didn't want to do that. (7, 16)

After a brief transitional period as a quintet with new guitarist Ollie Halsall (Patto), Allan and Paul  Williams left Tempest (although with no hard feelings, as Hiseman would later be part of an embryonic I.O.U. demo). Musically, Allan's brief time with Halsall made an important impression: 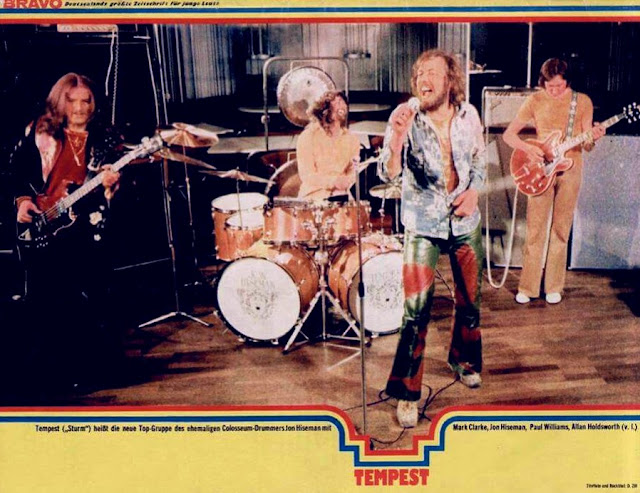 Tempest's self-titled debut is an interesting mix of  '70s hard rock and progressive psychedelia. Allan's guitar tone is uncharacteristically "dirty" on most of it (probably due to the ES-335/fuzz box combination), but it's interesting to hear some of his polychordal ideas adapted to a hard rock style. Some "Clapton-esque" guitar wailing shows up here (probably picked up during his Glen South Band days), but Allan's wah-wah guitar leads were mostly on their way out. Interestingly, the unique, opening punk riff of "Brothers" also seems to hint at an unconventional 'new-wave' sound, a sound later developed by U2 on their War album).

Overall however, the compositions are pretty conservative compared to the complexity of the 'Igginbottom pieces from four years prior. One can easily imagine Hiseman's new project being an attractive idea (a sax-less guitar-band version of Colosseum), but it's clear that Hiseman pushed for a much more traditional (commercial) sound as the album progressed. On the other hand, the songs do tend to grow on you...

zzzz
zcThis song features some interesting "new wave-ish" rhythm guitar elements.
Again, a very unique detour in Allan's musical development.
z
Tempest: Under The Blossom
In 2005, a remastered edition of Tempest's 2-record discography was released with an additional June 1973 BBC radio recording of the full band with new guitarist Ollie Halsall (in the right channel). This is most likely Allan's last show with Tempest, as he says he never saw Ollie again after this show. The performance is literally over-flowing with guitar solos, as the two proto-shredders seem to be goading each other on. Halsall's unique tremolo bar technique (mentioned by Allan above) can be heard here as well at one point (Ollie's 2nd chorus solo in "Gorgon"). The song "Brothers" is expanded with a somewhat derivative (but still fun) 12-minute jam on a soul-blues groove in the middle (live quartet renditions prior to Ollie's arrival had an unaccompanied Holdsworth solo guitar spot in this position).

Tempest with Allan in the left channel and Ollie Halsall in the right.
Ollie's tremolo bar technique on this song may have inspired Allan to explore similar areas.


With Tempest and fuzz-rock behind him, Allan resumed sessions with pianist Pat Smythe in London's jazz clubs. However, one chance meeting of some future importance did take place at this time - meeting and playing with bassist Alphonso Johnson from Chuck Mangione's visiting band. A suitably impressed Johnson would later report on the phenomenal Holdsworth to American drummer Tony Williams... However, before Allan's Big Apple adventures began, he reunited with some former Nucleus band mates for another important musical detour... 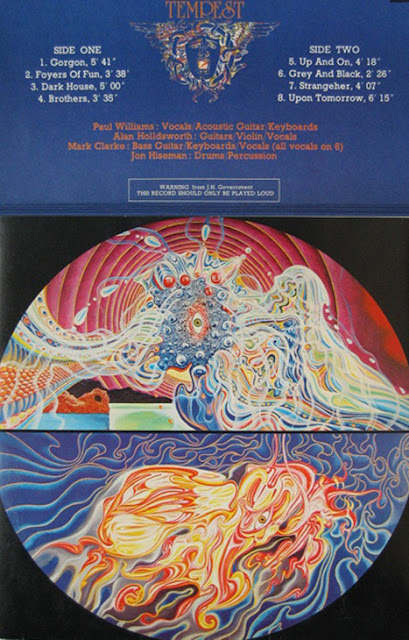 Next: Into the Soft Machine
Previous Chapter: London Jazz and Ian Carr