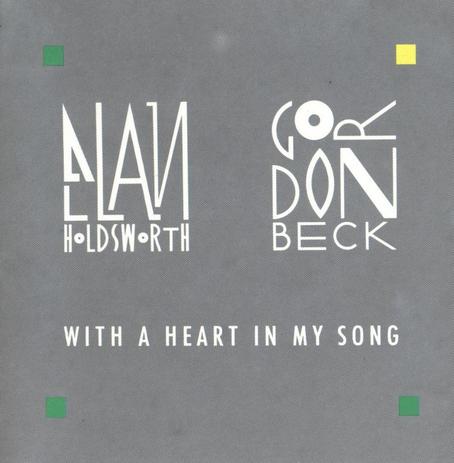 Jump to Music Analysis:
With A Heart In My Song
None Too Soon

One of Allan Holdsworth's longest musical partnerships was with pianist-composer Gordon Beck, reaching as far back as the late '60s in London. In the late '70s, just prior to forming his solo band I.O.U, Allan had recorded a couple records with Beck, with the the second one being purely a duo affair (The Things You See). In the late '80s, Beck decided to spend some time in California, and this gave the two of them an opportunity to do another collaboration, this time with Allan playing the SynthAxe (instead of electric and acoustic guitars).

The resulting album, With A Heart In My Song, was created from multiple tracks of keyboards, SynthAxe, sequencers and some electric guitar, and also features one "solo" composition from each composer. These sessions were being completed and mixed around the same time as Secrets, and so one song, "54 Duncan Terrace", made it onto both albums (and provides an interesting opportunity for comparison). Allan and Gordon had hoped to do a subsequent duo tour, but unfortunately Allan's reputation as a "rock" guitarist ended up becoming a barrier to many venues.


"I was really looking forward to a European tour that was supposed to follow the release of my latest album with [pianist] Gordon Beck, 'With A Heart In My Song'. We were going to go out as a duo and play material from the album, and I was really excited because it was going to be the only tour I'd ever done where I'd only play SynthAxe - I wasn't going to take a guitar. It was going to be acoustic piano and some synthesizer stuff, with some rhythmic things that were sequenced. The guy from the record company called and told us that when they learned of my involvement, everybody over there said, "Oh, no; that guy's a rock player." It just put them off. I feel really frustrated by that, because I don't really see the music I play as rock at all. I mean, I can see its roots, but I think they must just hear the tone; a somewhat distorted guitar sound, and automatically the music goes right by; all they can think is "Oh, this is rock." It's a weird world." (30)


Michelle, and None Too Soon (1996)
Leaping ahead about 8 years, Allan had essentially wrapped up a decade of recording and touring with his main electric quartet (and producing the albums Secrets, Wardenclyffe Tower and Hard Hat Area). However, an opportunity to record a Beatles song for a tribute compilation soon pointed Allan towards a more "trad" direction. 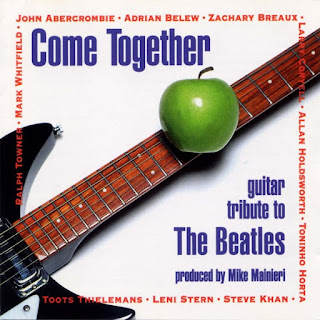 "I did a compilation album a few years ago where guitar players did their renditions of Beatles tunes. When they called me, I had two days left to prepare something. Coincidentally, Gordon Beck, a good friend of mine - and a great piano player - was staying for a few weeks at my place. It was his idea to do a rendition of "Michelle". Now, I'm a big fan of Gary Willis. Especially when he plays swing, he sounds fantastic. I know the conflicts that may arise between bass players and drummers, so I asked him with whom he liked to play with, and he said Kirk Covington. Funny, because that's half of Scott Henderson's band, Tribal Tech. We did the song pretty fast and I really liked the way things turned out, so I decided to ask them again for my new album (None Too Soon).

"I grew up listening to that kind of music (traditional jazz). I was never actually actively involved in playing like, standards or something, so what I would do was – what are the chords, these are the scales – and just play on it. I didn’t have a formula for it – I just played it as if it were an original tune I had never heard before. We thought it was a good idea to show my playing in a different context. Maybe my music becomes more accessible for people if they can recognize the songs? I wanted to establish that a chord sequence is a chord sequence: the fact that one is traditional jazz and the other is from my own music makes no difference. The other thing I wanted to achieve was to play in a traditional context with my usual distorted sound. I think it worked. The other good reason for this choice is that I haven't written enough original material to fill an album"(66, 86, 44)

None Too Soon was the first album to be recorded entirely in Allan's home studio. In this project, not as much 'room sound' was required for the rhythm section (this same ethos and sound would be found in Allan's next album, The Sixteen Men of Tain). This was the first time Allan had worked with drummer Kirk Covington, but bassist Gary Willis had previously contributed to "The Un-Merry-Go-Round" from Metal Fatigue (1985). During the None Too Soon sessions, Allan overdubbed his solos after the rhythm tracks were first completed.


"While recording the basic tracks - bass, drums and piano - I just engineered. The basic sound is pretty much traditional: drums and bass play swing. I've tried to keep their sound pretty dry. I also played some SynthAxe here and there. Probably the album sounds more produced than your average jazz album, but that was my intention. I wanted to mold the whole situation to my own thing - without sacrificing the songs, I hope.

"Kirk plays pretty loud and it appeared impossible for me to set up my stuff without getting serious signal bleed. I could have played straight into the mixing board through a Rockman - I did that in the past. But it happens too often in a studio situation that I'm happy with a live guitar solo and then we can't keep the take because the drummer isn't happy - or vice-versa. That's why I stopped a long time ago to work like this. In the past, I thought that if a solo wasn't recorded live, it's not worth listening to. But it's nearly impossible for everybody to be happy with the same take as a band in a studio situation. While recording the basic tracks, the drummer was the point of reference. If he was happy, we kept the take. Gary Willis did some overdubs here and there, at home, on his ADAT. That took approximately two days. All in all, the basic tracks were finished in three to four days. If I overdub the guitar solo, I try to lock in with the music I'm hearing. In the past, the end result sometimes sounded as if I was just not there. Lately things have been going better and better. It's still improvisation, and that's what's important for me. I think it turned out pretty good and we'll probably end up doing another, but we'll use a real piano next time, as poor old Gordon had to deal with a digital one - something he's not used to at all!" (44, 45) 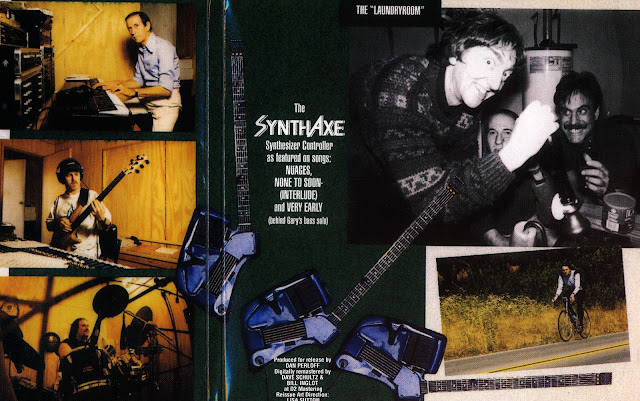 
"I was mainly playing my Steinbergers through a couple of Mesa Boogies, one of which is a Dual Rectifier, although I've actually switched to Carvin guitars just recently. Bunny Brunel (bass player, ex-Chick Corea) came over with this amazing Carvin bass guitar. I know they always had this reputation of doing high quality guitars at a lower price and all that stuff, but this guitar was really pretty amazing. Bunny suggested that I talk to them and see if they would make me an instrument. It turned out that they were interested in doing a special one-off custom guitar, but the bottom line was that if they weren't able to make a guitar that I was going to play, then it was no deal. So they came up with several prototypes and they kept changing them and modifying them. I got two of the H1 advanced prototypes just a few days ago and they're absolutely amazing. I'm really happy with them, so that's what I'm going to be playing from now on. I used one for a recording yesterday and it sounded great!" (45)


“When Steinberger (temporarily) folded, Bill DeLap stepped in and made me a number of great wood-bodied headless guitars – including a couple of double-necks (regular/baritone). I used them on Hard Hat Area, None Too Soon and The Sixteen Men of Tain." (64b)

A little more detail was reported by Chip Flynn on the Holdsworth FaceBook group:


"The 'shave and a haircut': During the None Too Soon sessions, Allan worked tirelessly trying to get sustain and clarity, and a tone befitting an electric jazz context. He wanted to 'shave' out the rattiness of the upper treble areas.. So he set the DG1000 to zero bass, treble almost off, and high and low mids around 5/6 - took that signal and 'shaved' the treble at 4K, and rolled in more bass with an 1140 TC Parametric EQ. Then he compressed that sound with a DBX compressor and used a noise gate to clamp the note when he lifted his left hand fingers.. This went into a borrowed JCM 800 to his Holdsworth Harness, to a (consumer) Yamaha home stereo amp.. We were on the phone a lot during this period... Allan nicknamed this technique the 'shave and a haircut'. The None too Soon guitar was a Spruce-topped Delap. Allan said the guitar was too soft in sound to gig with."     - Chip Flynn (5/30/17)

Next: Chad Wackerman
Previous Chapter: Secrets (1989)
Go to the Table of Contents...