Devil Take The Hindmost: The Otherworldly Music Of Allan Holdsworth 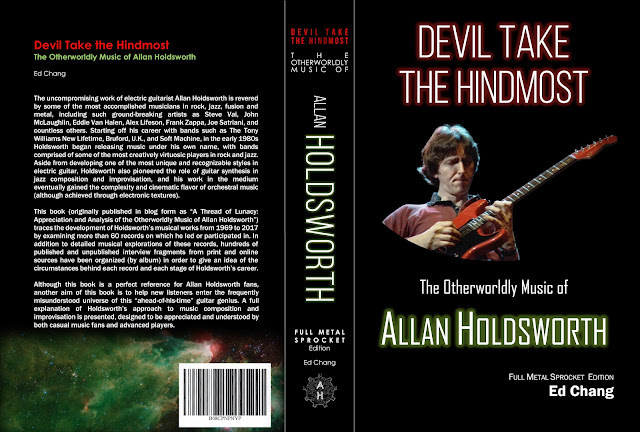 An updated version of this blog is now available as a digital eBook and a paperback from Amazon. Below I answer some questions about to this new book for both followers of this blog and for new readers.

What is Devil Take the Hindmost, The Otherworldly Music of Allan Holdsworth about?

Allan Holdsworth is probably the most famous “unknown” guitarist on the planet. His music falls into the category of rock or jazz, but it has a very progressive flavor - so much so that it tends to be musicians who “get” him the most. The usual “names” mentioned when talking about Allan’s fans include guitarists like Eddie Van Halen, Steve Vai, John McLaughlin, Frank Zappa, Yngwie Malmsteen, and Alex Lifeson, but there are hundreds more musicians from many styles of music. This book is an introduction to Allan’s music intended for both fans and casual listeners, and traces its development from Allan’s beginnings in a late-60s “novelty pop band” to his “semi-revered” status with the shred rock crowd in the 80s to his later years as a  composer of improvised, “imaginary film music”.

Additionally, because Allan played in so many styles and was a member of so many bands (such as Soft Machine, U.K., Bruford, and Gong), this book touches on the history of several progressive rock bands. It also describes his work with important modern jazz leaders like Tony Williams, Jean-Luc Ponty, and John Stevens. The main thing, however, is that it provides detailed breakdowns of every song Allan ever played on in order to either help new listeners understand these sometimes intimidating tunes, or to add to the enjoyment of the music of those already very familiar with them. The music of Allan Holdsworth is kind of like modern classical music, in that in some cases one has to almost learn how to appreciate it. But when one becomes comfortable with these initially alien melodies, they become a source of continuing pleasure.

How did you first become a fan of Allan Holdsworth?

At some point in the 80s, Eddie Van Halen mentioned that he was going to produce a record by his favorite guitarist, Allan Holdsworth. Around the same time an issue of Guitar Player magazine included a “flexi-disc” sampler record of Holdsworth’s “Devil Take the Hindmost”. I had no idea what was going on in that song musically, but the incredibly virtuosity was a real attention-grabber. Both then and now, his sound is completely original and has a distinct personality.

Why did you write this book?

In 2017 Allan passed without warning. I think to my generation he was the first of our guitar heroes to go. In the last few years prior to this I had been creating blog projects which analyzed the works of classical composers like Beethoven and the avant-garde German composer Karlheinz Stockhausen. In a tribute to Allan I decided to do a blog examining every Holdsworth-related record with the same kind of music-focused approach. It was also a really good opportunity to organize (by album) the massive collection of Holdsworth interviews found on Per Stornes and Olivier Feuillerat’s Holdsworth websites: (http://fingerprintsweb.net/ahwiki/index.php and http://ofeuillerat.free.fr).

The bulk of the book was written from May through November of 2017. Each week I posted a new entry on my Holdsworth blog which acted as a “chapter entry”. In late 2019 the small U.K. label Jazz In Britain asked me to write liner notes for their archival Holdsworth release Warleigh Manor. They also expressed interest in putting out my Holdsworth blog project as a book. Jazz In Britain eventually printed up 400 copies and they all sold out within a month. Afterwards, I decided to self-publish the book using what I had learned from the Jazz In Britain experience. The latest edition of Devil Take the Hindmost has 20% more material than what I had originally published on my blog and has been updated with 3 years’ worth of new Holdsworth releases. It also reflects more recent conversations with Allan’s old bandmates and has different photographs, some of them shared by his bandmates exclusively for this book. The latest print edition also has slightly larger print than the Jazz In Britain edition.

What effect has Allan’s fanbase had on your book?

The largest collection of Allan’s online fans can be found on Facebook at the Unreal Allan Holdsworth Group (https://www.facebook.com/groups/allanh/), which currently has almost 17,000 members. The members of that group have been incredibly supportive of this project. There’s a passion at the Holdsworth group which is very unique, and generally more respectful than what I’ve seen on other Facebook fan groups. I think part of this is because Allan’s children and bandmates are active on the Group as well. When I put out the eBook of my Holdsworth book on Kindle the people at URAH drove it to the #1 New release spot in the “Music History & Criticism” category for almost two solid weeks (beating out books on Beethoven, Jimi Hendrix, Miles Davis and Prince!). I am hugely indebted to Allan’s fans for the existence of the book in both its original and current form.

Is this book connected with the Holdsworth estate?

No, it is “unofficial” in that respect. Although they have supported the release online, I didn’t contact them for any kind of biographical details, since that was not my focus.

How accurate is the book from a historical viewpoint?

The musical breakdowns of course are based on my original analyses, but all of the biographical information is according to Allan’s own words, as printed in interviews over the years. There are times when Allan would not remember things exactly the same way from interview to interview. I would say the factual, biographical aspect of the book can be trusted as much as any other oral history could be trusted. In other words, I didn’t interrogate multiple witnesses for “the truth”. My main objective was to be accurate in its coverage of Allan’s music.

What is the difference between the “Loose Cog” edition and the “Full Metal Sprocket” edition?

What is the significance of the title?

“Devil Take the Hindmost” is my favorite Holdsworth song. The solo on that track is phenomenal! The title itself refers to a form of cycling competition (Allan was a bicycling enthusiast).

What surprised you the most?

Allan’s solos are what drew me to his music in the first place, but while going through his albums I actually developed a real appreciation for his chordal and harmonic approach. Although he is known as a unique soloist, his musical development is actually entirely based on his chordal knowledge. Most rock songs tend to just jam out in one key or over a 1 or 2 chord vamp, but one of the reasons Allan’s solos are so unusual is because he’s frequently playing over exotic chords and/or quickly changing keys mid-solo. In the process of analyzing Allan’s music I personally sharpened my ability to hear fast-changing harmonies, whereas I had originally expected to be more focused on scales.

What other books have you written or are planning to write?

This is my first book in print. I have completed several blog projects which could be considered “books”, since they are written to be read that way (with a beginning, middle and end). It’s very possible that I’ll start looking at the possibility of adapting a few of these into book form as well. Some of the subjects I’ve written about include the music of Stockhausen, Beethoven, PinkFloyd, Jimi Hendrix, film music and world music (specifically Japanese and Turkish ethnic music). Other non-music related blog projects include ones describing the history of Marvel Comics, the fantasy fiction of J.R.R. Tolkien, H.P. Lovecraft, Michael Moorcock, Robert E. Howard and Roger Zelazny. Each of my blogs have links to one another (“My Other Blog Projects”), but the Holdsworth blog on which this book is based can still be found at https://threadoflunacy.blogspot.com/ (although it is greatly out of date).

Where can readers purchase this book?

Amazon distributes the Kindle version and paperback “print on demand” editions of this book. Smashwords also distributes the eBook to all retailers besides Amazon, including Apple Books, Barnes & Noble, Scribd, Kobo, etc.

Again, I offer my great thanks to the supporters of this blog and resulting book, it could not have been done without you. Ultimately, I hope that this book will help to further the legacy of Allan Holdsworth amongst the music-lovers of the world, and that its insights into Allan's quest for innovation might also help inspire other creative artists to reach for the same great heights that Allan did.

Email ThisBlogThis!Share to TwitterShare to FacebookShare to Pinterest
Older Posts Home
Subscribe to: Posts (Atom)
"(For each composition) I like to have a specific thing that happens more or less in that tune alone, and is not found consistently in any of the other ones.