Jump to Music Analysis:
Bruford: One Of A Kind
Bruford: Rock Goes To College

Bruford: One Of A Kind
After Allan Holdsworth and Bill Bruford parted ways with prog supergroup U.K., the subsequent reformation of Bruford's solo band (with keyboardist Dave Stewart and bassist Jeff Berlin) would unfortunately only result in one more album. One Of A Kind was recorded in the opening months of 1979 and followed with a few weeks of touring, but Allan's restlessness soon struck again:


"Bill's music was so close to UK in essence. I called it 'jigsaw' music. As much as I loved working on his albums, it just didn't work for me live. I wanted to get back to the type of feeling that was happening when I was working with Tony Williams...And then when I started working with Gary Husband...I had just been introduced to him and played with him a couple of times and I thought, 'Oh man! I wanna play with THIS guy.' So I decided to form my own band and that's what cut short the Bill thing."  (16, 62)

When considering Allan's decision to depart from Bruford (and instead, move towards "looser" settings), it's probably worth noting that Bruford's songs were dominated by exacting, labyrinthine "tricky dick" melodic material, and One Of A Kind was Allan's third album with Bill by this time. Additionally, Jeff Berlin's rhythmically-gymnastic song "Joe Frazier", while not recorded with Allan on album, was already being played as part of Bruford's live repertoire during Allan's tenure. Allan was apparently tiring of this kind of 'precise' playing, and it no longer seemed to be as challenging to him as it might have been in the past. In any case, Bill wryly describes Allan's sudden departure in his autobiography: 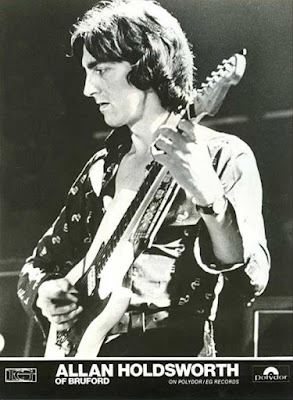 "On yet another 'happy' day, guitarist Allan Holdsworth called me to pull out of a French tour with about four days notice. 'Allan,' I fumed, 'you can't do this. Not at least without leaving me with a workable replacement.' Allan, one of the most spectacularly individual guitar voices on the planet, would be unlikely to produce someone who could begin to come close to what he did. 'Funny you should mention that,' he said, 'because there is this bloke in Slough that I've been teaching a bit, and he could probably do it.'  There was indeed a bloke in Slough. Incredibly, he was willing, able, and available to learn this impossible music, come on this tour, and pretend he was Allan Holdsworth. I'm not sure the deceit was perfect, but we got away with it...To this day, there are those with not very good ears who think he doesn't exist and that 'John Clark' was a pseudonym for an unhappy Holdsworth." (90)

Nonetheless, Bill was sympathetic to Allan in his 2005 interview with Cristophe Coureau:


"...he was unhappy - the complaint was, I think, that he was boxed in by the compositions, and he was probably right. I wrote too much and didn't leave enough space. This indicates a lack of trust, as if somehow I could not rely upon the musicians to come up with strong improvised material on the spot. That's partly true, and these studios get very expensive very quickly. I 'directed' Allan as a movie director might direct a movie-star, and he didn't like that much. Plus the clock was ticking... On those records, my own playing was like an afterthought. I just worried about everyone else, and would they show up tomorrow."  (77) 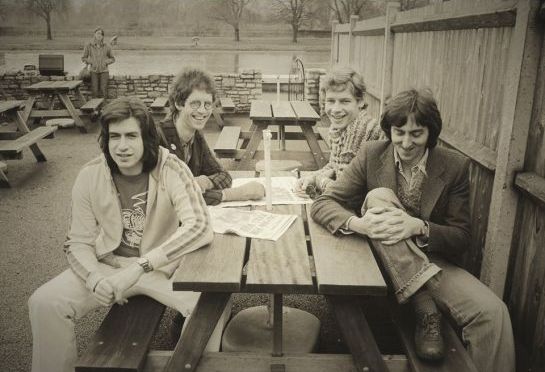 Musical Analysis:
One Of A Kind included more compositional contributions from Bill's band-mates than in its predecessor. A couple of the songs had just been road-tested with U.K., and Allan's rejected Virgin demo "The Abingdon Chasp" (to be caught up on in the next chapter) was here re-arranged as a Bruford song. These factors make the resulting album a somewhat more organic affair, but at the same time, without Annette Peacock's contribution, it seems a bit more "earthbound". Bill also incorporated more tuned percussion melodies into his compositions than ever before (which was often carried by Allan's guitar in live performances).

On four tracks below ("Travels with Myself – And Someone Else", "The Abingdon Chasp", "Forever Until Sunday" and "The Sahara of Snow Pt. 1"), I appended edited commentary from Bill Bruford (BB) in conversation with guitarist Randy Roos (RR) during a 1980 interview conducted by Matthew Mandell and Kenneth Fall.


Gear-wise, Allan must have found another red Gibson SG to replace the one he lost in the Tony Williams Lifetime days. He is, in fact, seen playing it in the 1979 "Rock Goes to College" video (analyzed below). Actually, parts of Bruford's Feels Good To Me album and some of U.K.'s live radio broadcasts (released on the U.K. "Collector's Edition" box) both have a strong Gibson SG sound to me (of course, Allan can be seen playing the white Dick Knight Strat in the February 1978 Old Grey Whistle Test performance, so I could be wrong). He also continued to use his Marshall 50 watt head with Marshall 4x12 cabinets, all with modded ("bodged") elements. Sometime during this period he also added a 50 watt Hiwatt to his arsenal of amp heads, as well as a Vox AC30 (particularly on the One of A Kind sessions).
Bruford: Rock Goes to College (2009)
Probably one of the most interesting archival Bruford releases from this period is the Rock Goes To College DVD and CD, which reunited Annette Peacock with the Bruford quartet at Oxford Polytechnic on March 7, 1979. The 2009 Winterfold label release (essentially an audio mix of the DVD) is broken down below. It's probably worth noting that it's an incomplete performance record (the missing first two songs can be heard here) and Allan is a bit under-mixed in my opinion - great film footage, though. It can also be found on YouTube...


As a footnote to the Bruford years, just after Allan's final May '79 shows with Bruford, he was reportedly involved in sessions for Annette Peacock's next album, The Perfect Release (as per David Wells' liner notes in Peacock's My Mama Never Taught Me How To Cook, 2004). These sessions also supposedly included Bruford, Dave Stewart, Jack Bruce and Jeff Beck. However the album's final release featured an entirely different band, and the aborted sessions with Holdswoth and Beck have never surfaced.

Next: Holdsworth and Company
Previous Chapter: U.K.
Go to the Table of Contents...