Jump to Music Analysis:
All Night Wrong
The Things I See

After the completion of his SynthAxe solo album (Flat Tire), Allan eventually went back on the road with different versions of his trio band. 2002 was notable for its reunion of "I.O.U., Mk. II", with Chad Wackerman and Jimmy Johnson in a trio. A May 5th live set from the Roppongi Pit Inn in Tokyo, Japan was released on the album All Night Wrong. This album includes two new songs ("Alphrazallan" and "Lanyard Loop"), as well as a very old song ("Gas Lamp Blues") which up until this point had never been "properly" released ("Gattox" from Velvet Darkness previously used the "Gas Lamp Blues" chord progression for its solo section). It also offered an extended chordal-delay improvisation intro to "Above & Below", a newly-arranged instrumental version of "The Things You See", and a freely-structured trio "Zone" (opening with a Chad Wackerman drum solo).

Although All Night Wrong doesn't present a full concert program, it still holds together extremely well as an album experience (although I would have preferred a final "Ruhkukah" in there myself...). A full set from this tour would have looked something like this:

Snakes and Ladders
Trio tours continued through the opening years of the new millennium, with bassist Ernest Tibbs (protege of Holdsworth-alum Gary Willis) joining the band in 2003 through drummer Joel Taylor. The Holdsworth/Tibbs/Taylor trio tour also added new songs "Leave Them On" (not released until 2010 on Gary Husband's album Dirty & Beautiful, Volume 1, although with a Jan Hammer solo in place of a Holdsworth guitar lead) and "Madame Vintage" (from Soft Works' Abracadabra), as well as a live trio version of "Bo Peep" from Flat Tire. Around this time Allan also replaced most of his rack effects with a set of Yamaha UD Stomps. A passable audience video of a 2003 Tibbs/Taylor trio show in Italy can be found here with the below set list.
A projected album with the title Snakes and Ladders featuring both the Johnson/Husband and Tibbs/Taylor trios was partially recorded (with one track repeated for each trio), but so far has not seen the light of day. Some of these new songs were released in live form on the above-mentioned All Night Wrong album. Another album after Snakes and Ladders was to feature the Chad Wackerman/Jimmy Johnson trio.

"I’d started a project with Gary Husband and Jimmy Johnson about five years ago that was supposed to be released on Gnarly Geezer before the label folded. I’ve got all the recordings from that session, along with additional tracks recorded with drummer Joel Taylor and bassist Ernest Tibbs a couple of years later, and the first album will feature a mixture of those four musicians. One interesting thing about the project is that one of the songs was recorded by both groups, and the versions turned out so differently, that I want to include them both, just to show how the musicians can radically change the music. I don’t tell anyone what to play specifically. I just show them the compositions, and their interpretations are completely up to them. With Jimmy and Gary, the music is a bit more high energy and rock-oriented, and with Ernest and Joe, it’s a little softer and goes into Sixteen Men of Tain territory.

"Because of the different way these groups play, I chose to do some tunes with one group and not the other. In general, I was writing tunes that were designed for each unit. My writing process starts the same way, regardless of who I’m writing for. I start by improvising and when I get an idea, I’ll keep working on it. Sometimes nothing happens. For instance, during my six-year hole, I wasn’t feeling very creative at all and lost interest in music. I didn’t go see music. I wanted nothing to do with it for a long time. Now, I’m writing again and have quite a few new tunes that we haven’t played yet because we haven’t had time to rehearse them. I’m looking forward to finishing this album and moving on to the next one. The record that comes after Snakes and Ladders will be another trio record, with Chad Wackerman and Jimmy Johnson, who I’m currently touring with. (64, 65)

By 2004, live dates would start incorporating a mid-set 5-part medley consisting of "Madame Vintage", a solo chordal-delay improvisation, "Above & Below", "The Things You See" (the new instrumental version from All Night Wrong), and "Material Unreal" (from Then!). 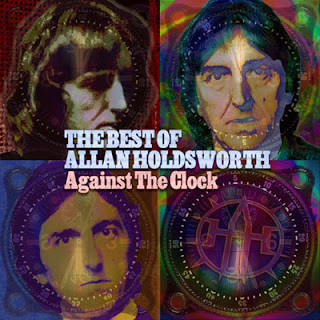 The Best of Allan Holdsworth: Against the Clock included 2 CDs, one collection devoted to electric guitar, and the other devoted to SynthAxe. This album also included two brand new tracks, the first being "Let's Throw Shrimp", essentially a funky, mid-tempo, pedal groove "Zone" with the Johnson/Wackerman trio.

This is followed by an arrangement of the early 19th century American folk song/sea shanty, "Shenandoah (Across the Wide Missouri)", where Allan develops the lyrical melody line over resolute SynthAxe chords. It's possible that Allan might have been inspired by Bing Crosby's version, but that's just a guess on my part. 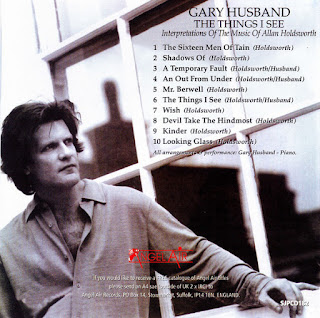 Going back to 2001, original I.O.U. drummer/pianist Gary Husband recorded a solo piano album covering Holdsworth compositions titled The Things I See - Interpretations of the Music of Allan Holdsworth. This album was extremely well-received by Allan, as it treated his songs as "jazz repertoire" in order to create fresh new arrangements (in fact, three tracks are so radically different that Gary added himself as co-composer for these).


"I was very moved by it. It meant alot to me. The fact that it was interpretations of my music was something I really liked. There are people out there who make these clone records, and try to do everything verbatim just like it was, and what he did was much more deep. He came at it from a totally different perspective and I really liked that. " (59)

Allan's impassioned notes on the Art of Life label's website are worth reprinting here as well:

Gary Husband is a true friend and has been for over twenty years.
Since we met, I have always thought of him as a musical and spiritual brother. Gary has always had the ability to interpret my music in a way that was, for want of a better phrase, like one. He is one of the most talented and original musicians I have ever had the pleasure of making music with.
When I heard Gary was going to make a recording of some of my music, I was, of course extremely flattered. But upon hearing it, I was moved to tears.
I heard through the "grapevine", much to my dismay, there have been people who had gripes about these interpretations. DON'T YOU UNDERSTAND, THIS IS WHAT THIS RECORDING IS ALL ABOUT - INTERPRETATIONS!!!!!!
This recording is beautiful, magic. Absolutely true to the spirit of the music (This is not some verbatim, clone ridden B.S.)
Not only does he showcase the compositions in a very beautiful and classical way, but more so and without a doubt, showcases his truly amazing talent.
Thank you Gary Husband so very, very much.
I love you, always.
Allan Holdsworth - October 2001

What's especially interesting about this solo piano affair is that Gary uses Allan's tunes to explore quite a wide variety of musical styles, from post-romantic classical to free jazz to post-war avant-garde classical (ie -  Claude Debussy to Cecil Taylor to John Cage). Four tracks are relatively brief "impressions", while the other performances use the song heads to launch into a variety of pianistic (and drumming!) styles. However, each piece is built off of a scaffold comprised of Holdsworth's complex harmonic constructions.