None Too Soon
In 1994, Allan had the opportunity to do a Beatles cover ("Michelle") with long-time collaborator and pianist Gordon Beck, supported by returning "guest-bassist" Gary Willis and new drummer Kirk Covington (both from Scott Henderson's Tribal Tech band). From late '94 through Spring '95, Allan and the "Michelle" quartet also recorded an album of jazz standards, None Too Soon (previously covered in the last Gordon Beck chapter), which was the first Holdsworth album to be recorded entirely at Allan's newly-rebuilt home studio. This was largely a one-off project, as the ensemble never actually toured to promote the album (although the Hard Hat Area band did tour in 1995). Unfortunately, the album's release had some distribution issues, and was not available in America until late 1996. However, the album's more "trad" elements apparently did get Allan to start thinking about songs for a new album with a similar, less "electric" aesthetic.

Reportedly, by February 1996, scattered live dates with this trio were already under way, and initial recording sessions were begun in 1997 (a few '97 gigs also featured Chad Wackerman (Umea Jazz Fest) or Peter Erskine (NAMM) on drums, but the Carpenter-Novak rhythm section was essentially Allan's main band for the second half of the '90s). At this point, live setlists (example below) began including several new songs.


Although Allan was without a record deal during this time, the early Holdsworth-Carpenter-Novak trio was fortunately recorded on a few professional broadcasts, which can be found on YouTube:

Gear
In the late '90s, Allan continued to play the DeLap headless guitar, amplified through a Yamaha DG1000 pre-amp, Yamaha DG-80 amps and two Rocktron Intellifex processors (55). Allan also experimented with the Roland VG-8 guitar processor (notably on the harmonized chordal head of "The Sixteen Men of Tain"). In order to use the VG-8, Allan's guitar had to be fitted with a GK synth pickup, which fed 6 individual string signals to the programmable Roland VG-8 guitar emulator. The Roland VG-8 essentially takes the electric guitar signal and applies various effects in order to emulate different amplifier and pickup combinations. It can also apply drastic EQ changes to emulate non-guitaristic timbres such as saxophone, etc... This set-up also acted as a de facto "stereo delay" when mixed with the guitar's normal pickup output.


"It's just like an extension of the guitar. You're not dealing with any modules where you have to figure out how to control the envelopes and all that stuff. Instead, you can manipulate the input from a single pickup guitar like I use and make it sound like a three-pickup Strat or two single coils or an acoustic guitar. It just adds all these extra colors that are guitar-based. And there are no time delay problems that I can perceive. It's like using an EQ or a phase shifter. If I mix the VG-8 signal with a straight signal, it'll be synchronous. And since I use two stereo amp setups, I can send the straight signal to one rig and the VG-8 patch to the other rig, which really sounds good." (84)

By 1997, Allan also began adding custom Carvin models to his arsenal of DeLap's and Steinbergers.


"I've been playing a custom guitar that I designed for a company called Carvin. It's a hollow guitar, kind of like a closed semi-acoustic. The top and the back don't touch any part of the wood on the inside except at the bridge. So it feels a lot like an acoustic guitar except that it's closed, there's no holes. You can squeeze a little more dynamics out of that kind of instrument than a solid body. It's what I needed for the direction that I wanted to take. I’ve used various prototypes and production models – including some special H2Ts with custom Roland pickups for use with the VG System that has flat radiuses to match the necks on my guitars.

"I've also been using Steinbergers, which I still have. I'm very fond of Steinbergers. It's actually hard to go back to a guitar with headstock and tuners on it after you've played a Steinberger. You kind of get spoiled. And I also play the custom-made guitars by Bill DeLap, which look like Steinbergers. They're headless. But they're wood as opposed to plastic, which the real Steinberger is." (47, 64b)


The Sixteen Men of Tain
In 1999, the trio with Carpenter and Novak finally released The Sixteen Men of Tain on independent mail/internet label Gnarly Geezer (an expanded re-release in 2003 on former U.K. bandmate Eddie Jobson's Globe Music Media Arts label added new opening and ending tracks). Tain has a good mixture of complex song structures, looser improvisatory sequences, and long, enigmatic, modulating harmonies designed for complex "polytonal" soloing. In fact, two songs, "The Sixteen Men of Tain" and "Texas", actually have more than one set of blowing changes. "Tain" has a bass solo over the head changes, and then a separate modulating harmony for the guitar solo. "Texas" has a main set of changes for the guitar solo, but the trumpet solo's final chorus is actually a variation of the song's head.

Dave Carpenter's acoustic bass and Gary Novak's polyrhythmic stick-work also seems to have inspired some more "swinging" grooves. Not only that, but on two songs Allan invited guest trumpeter Walt Fowler to sit in. Fowler had played with Allan a few years prior on one of Chad Wackerman's solo albums (The View), and was friends with Carpenter and Novak.


"We did two tours of Europe with that group (and some gigs in the States). So after the end of the touring, I felt like I needed to record it. I had lost my record deal, so my manager loaned me the money to pay the guys to do the record. So we recorded it in like, one weekend, and then I shelved it, and sat it on the back burner until I got a record deal - which was about a year and a half later on this new small label (Gnarly Geezer). Then I went ahead and finished it.

"I knew that I was trying to refine this electric guitar sound and I felt this would be a really good backdrop for me to write some original music for, and have the intensity in the music, but have a slightly different texture to it, you know, a softer kind of feel. The fact that Dave Carpenter played acoustic bass was nice, because I was like 'Maybe it would be nice if you played acoustic bass on this record.' That's the beauty of it as well, because he - like a lot of the other bass guitar players I've played with - he plays a lot. If you put Dave on bass guitar, he's playing all the time, and he plays chords - I keep telling him I'm going to buy him a 1-string bass guitar! So giving him the acoustic bass was great. It was a good element to have, and I think it also added something to the sound, which is also important to loads of people's perception of it." (52, 48)

Interestingly, Carpenter first recorded 6-string electric bass for several tracks on The Sixteen Men of Tain, but these were later replaced by acoustic bass (as noted in Chris Hoard's liner notes to The Man Who Changed Guitar Forever).


"The title ("The Sixteen Men of Tain") comes from one of the (album) tracks. I used that because I like the sound of it. The first track ("0274") is a bit darker, but the title track has a sort of festive feel to it, a carnival kind of thing. When I think of that kind of thing, I think of alcohol. In Tain there's a famous (Scottish) distillery called Glenmorangie, and there's supposedly only 16 men who work there. On the bottom of every (whiskey) bottle it says 'Handcrafted by the 16 Men of Tain'. I liked the idea of a hand-crafted, high quality thing that is a single malt, and I think there's something of that in the album... I liked the way it turned out... Since then, I did another album with Gary Husband and Jimmy Johnson. I'm holding that one back cause this one only just came out!" (52, 53, 48, 49) 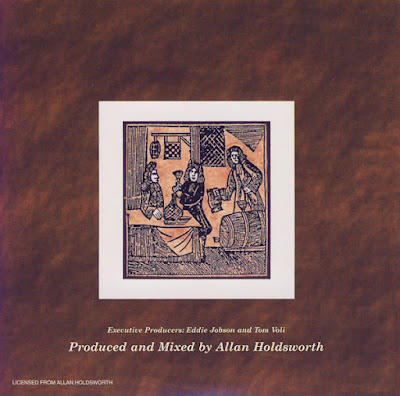 For a couple years after the release of The Sixteen Men of Tain, drummer Joel Taylor replaced Gary Novak for many live dates (notably on the Gnarly Geezer 2000 Galaxy Theater DVD featuring "Alphrazallan/Zone/Material Unreal", "Letters of Marque", "Gas Lamp Blues", "House of Mirrors" and "Above And Below"). Some mini-tours also featured the return of "old hands" drummer Gary Husband and bassist Jimmy Johnson. However, Allan's next release would be a true "solo album".