Hard Hat Area
After finishing a string of tour dates, Holdsworth and his live band at this time (drummer Gary Husband, keyboardist Steve Hunt and bassist Skúli Sverrisson) went into a recording studio to put down tracks for Hard Hat Area, which was released in 1993. This was the first album with Skúli Sverrisson on bass.

"When Jimmy Johnson wasn’t available because he was touring with James Taylor, Steve recommended Skúli... He was pretty amazing. After a few gigs he managed to play the material without reading - he had it in his head. He’s a wonderful musician and really unusual player.” (83)

Skúli talked about Allan in a recent tribute:

"I first met Allan Holdsworth when I flew out to Los Angeles for an audition to join his band. To my surprise he was there to pick me up at the airport. The day after, I found myself in a rehearsal room with Allan, Chad Wackerman and Steve Hunt, and without saying a word Allan counted off the first piece and there I was playing the music I had admired for years. After hours of playing, Allan looked at me and said, 'You got the gig'. 'What does that mean?' I asked, and he answered, 'Well, we´re going on the road next week'. This was in the early nineties and marked the beginning of almost a decade of life-changing music-making that took us around the world." (FaceBook post 17.04.18)

Like the early albums I.O.U. and Road Games (and to a lesser extent Metal Fatigue), the new songs this time around had been "road-tested", which gave the album a more organic feel .


"We had a lot more material before we started that one, more available than any other one...that's why I think 'Hard Hat Area' for me was a nicer album - you know, 'cause you had the same kind of thing as the first one (I.O.U.). The band toured a lot the last year and a half, so we played most of the music live before we recorded. Because of that, it has more of a live feel to it than the previous albums. I like that, and I must ensure that that's the way we do things from now on. You can hear people stretching, working the groove. It just sounds more organic, less sterile somehow than some of the other records. ...It was more of a 'band' record than my previous two, which were almost more like 'solo' records. When recording 'Hard Hat Area', we played almost everything together in the studio, whereas on those other albums, I recorded a lot of the tracks on my own, and then we added the bass and drums and other instruments afterwards" (41, 42, 83)

From a gear perspective, Allan at this time relied primarily on his regular scale, Bill DeLap semi-hollow-body guitar, as DeLap had borrowed Allan's long-scale baritone guitars for some additional modifications. One track also apparently used a new kind of MIDI-controller designed by Starr Labs.


“There was a little holdover from 'Wardenclyffe Tower' in that I played some SynthAxe and baritone guitar, but I tried to get rid of that and just play more regular guitar. At that time I was mostly playing guitars built by Steinberger and DeLap, and I was still using refrigerator-sized racks of gear to get my effects sounds. I also used an unusual synthesizer controller called a Ztar, built by Harvey Starr at Starr Labs. It’s like a little keyboard, but it’s laid out like a guitar neck, so instead of having the keys arranged like they are on a keyboard, they resemble frets. You lay it flat and play it like a piano or a pedal-steel guitar, but because you can play multiple notes on the same ‘string’, you can do some really impossible stuff, sort of like playing a three-dimensional keyboard. I used it on the improvisation that closes the album.” (83) 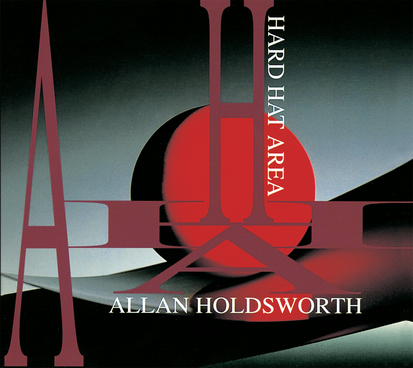 Aside from the SynthAxe track "Hard Hat Area", all of the songs on the album had at one time or another been part of the recent tour's set list ("Tullio" was rehearsed, but never actually performed in front of an audience). Live concerts sometimes ended with a "Prelude"-like "synthscape"/guitar duet, followed by a quartet "Zone" improvisation (represented on this album by the "Zone" following "Postlude"). Earlier "Zone" performances can also be heard on the live compilation album Then!.

The duo sequences with Steve Hunt and Skúli Sverrisson ("Prelude", "Hard Hat Area" and "Postlude") partially come across as impressionistic "imaginary film scores" (although "Hard Hat Area" does get pretty grooving in the second half), and this soundscape tendency would ultimately lead to 2001's Flat Tire. However, Hard Hat Area on a whole has a more "heavy" vibe going for it than the more pastoral Wardenclyffe Tower, and at the same time a greater sense of fun.

The songs were still based on labyrinthine modulating chord harmonies, but, in contrast to the last couple albums, Allan's solos seem (to me, at least) to go less "out", giving them a somewhat more "emotive" quality - major key cadences tend to sound more joyous, and minor key ruminations more solemn. Maybe Allan didn't feel the need to apply so many "exotic colors" (alternate scales), since the canvas itself (the chord progression) was already pretty exciting. On the other hand, it just may be that the compositions themselves have smoother, more naturally-flowing major key cadences. In any case, this album seems to have a fresh combination of "material real" melodies over "material unreal" chord modulations.

This album also closes out what I consider to be the "third period" of Allan's solo career. The first period (musically, at least) included I.O.U., Road Games and Metal Fatigue, and was kind of a "rock" period. The second period (notable for the SynthAxe elements) included Atavachron and Sand. The third period -  Secrets, Wardenclyffe Tower and Hard Hat Area - used a quartet band formation including Steve Hunt's keys, which enabled Allan to further develop long-form platforms for improvisation using harmonic modulation.

An Unfinished Track
Around this time Allan and Gary Husband worked on a song named "Grey Day", but it was never completed. Gary Husband recently unearthed and posted this track online for posterity...


"For some years I've maintained a strong affection for the bare bones of a piece my dear brother Allan Holdsworth formed and prepared, and one I attempted a drums take on, way back, oh... 1992 or 1993 timeframe. Allan had recorded a chord pass of this piece using his beloved DX sounds via the SynthAxe, and we had a day or two spare to do a bit of work on it together in his home studio. Unfortunately, I could not produce a drum pass that I was in any way, shape or form happy with, despite several attempts." (FaceBook post)

Just For the Curious
The other major release around this period was Allan's first (and only) instructional video. In this 1993 video (with supplemental book and CD), Allan talks about his favorite scales and some of his ideas about chord-melody composition. Several song selections are played live in the studio with Allan joined by drummer Chad Wackerman, bassist Skúli Sverrisson and keyboardist Steve Hunt. Unfortunately, the recording process for these sessions had some engineering issues. Nonetheless, the package was released (and is still in print), although Allan was sorely disappointed in the outcome (sonically, at least).

Live Studio Selections
The CD contains most of the audio selections from the video footage, but the video contains two additional songs not found on the CD for some reason ("Funnels" and "Tell Me"). Allan plays the standard scale neck DeLap guitar in the video throughout.


Scalar Concepts
In the instructional portion of the video, Allan describes his 10 "most usable" scales. In his mind, he transposes his scale shapes to the nearest Dorian mode shape (which is always - and confusingly - referred to as "the minor scale" in the lessons). The related modes don't matter, since he files every mode for a scale under one umbrella name. The 10 sequences below give varying "flavors" to play with, and you can fit these scales over various kinds of chords to get different effects. The first 4 scales have 7 notes each (like most diatonic scales). Scales 6-9 have 8 notes. Scales 5 and 11 are symmetrical scales, and so are extra "atonal". All of these scales are meant to be transposed to whatever tonic key is appropriate for the underlying chord harmony.


This above transcription of Allan's original notes shows the scales he would use for the solo section of "Tokyo Dream" (from Road Games). For this tune, he mostly uses the Dorian mode (minor scale), modulating to a new key for each chord. A D diminished scale pops up in the turnaround cadence (it's listed 4 times on top of each other with different notes to indicate their interchangeable roots). The "x II" represents a repeat. The "F#x/E" and the "A/Bx" indicate two places where different modes of the same scale can be used. The symbols at the bottom row are probably alternate scales, since they don't seem to be part of the primary solo harmony (I think). The original "Just For the Curious" book/CD (edited by Aaron Stang) has 5 additional scales, including the whole tone scale and a few additional 8 and 9-note scales.

Chord Concepts
In the section relating to chordal concepts and chord-melody composition, Allan explains how he can create a chord family by selecting 3 or 4 notes from a particular scale and then move all of the notes in the chord up (or down) simultaneously along the "permitted notes" in the scale pattern. This results in other chords found in that scale (each beginning with a different scale tone and using that voicing). Naturally, the original scale could be used for any song composed using these 8 (or whatever) chords, with the chord tones emphasized for each chord.

Allan explains that he thinks of each chord as representative notes from a particular "family" of notes (a scale). So, when chords go by (during a solo improvisation), he decides which family (scale) would be appropriate for a given chord, and adjusts his note choices accordingly. He also suggests (probably in relation to comping) that a chord can be "enriched" by substituting it with different inversions of itself, or with related chords found in the same key (ie - from a scale which contains the same notes). This is typically demonstrated whenever Allan is playing "rhythm guitar" underneath a bass or keyboard solo.

The video/CD/DVD/book package is nicely assembled, and the book which comes with the package includes many examples, exercises and song transcriptions to illustrate Allan's thoughts. Sadly, Allan never made a second volume, which probably would have gone into his ideas about poly-tonal soloing and harmonic modulation in song composition (not to mention his rhythmic ideas).