While working on his 1987 release, Sand, Allan Holdsworth concentrated on developing his skills with the SynthAxe MIDI-controller and creating new sounds with his Oberheim synthesizer modules. He also introduced some new inventions of his own to improve amp tone and recording techniques.

SynthAxe with Breath Controller
From a performance perspective, Allan began to use a "breath-controller" to modulate the SynthAxe's output. The controller's plastic tube acted as a kind of volume pedal when blown, and gave Allan the feeling of playing an oboe (or some other wind instrument). Unlike a Yamaha MIDI wind instrument, this mechanical device was basically a "fader", and in fact had no keys. It could be set up to control various parameters, but Allan primarily used it to control the attack and decay of SynthAxe notes (and sometimes the tone). Unlike on a regular guitar (or a piano for that matter), with the breath controller he could swell notes after they were picked, or fade them in. Allan can be seen playing the SynthAxe trigger keys and breath controller in this clip of "Pud Wud".


"I use the breath controller a lot on it, because I always wanted to play a horn. Breath controllers have been around for a long time, but keyboard players generally don't like them. But for me, it seems so natural, because I really think I should have played a horn. So when I play the SynthAxe with a breath controller, I am playing a horn; I feel like I've actually achieved what I wanted to do. There are a lot of things on the last track on the album that I did with the SynthAxe, simulating the guitar sound, that were very reminiscent of things that I would do on guitar if I could do them almost the same way." (20) 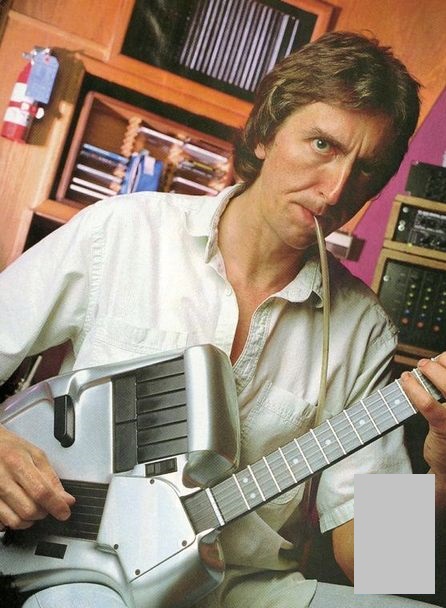 On the other end of the SynthAxe signal chain, Allan began developing his own custom sounds for the Oberheim Matrix 12 synthesizer module, and also added some Kurzweil Expander modules as well. This allowed him to create blended synth tones, or to have one synth take over when another synth module's range was too low or too high.

Steinberger TransTrem
Alongside the SynthAxe synth controller, Allan continued to play electric guitar, and he eventually moved from his signature model Ibanez guitar to a headless, synthetic-fiber Steinberger guitar, fitted with the company's TransTrem system, which kept all six strings in tune even when the whammy bar was raised/depressed.


"For the longest time I just didn't think the thing would work...and I was wrong. I picked it up at a NAMM show once and played it for about two seconds and ordered one immediately. I've never felt like that about a guitar since I was 20 years old...(The synthetic construction material) just makes the thing so stable and, from that respect, very controllable... My first Steinberger was the stock model with a TransTrem. I installed custom Seymour Duncan pickups, and I had Bill DeLap convert the radius to 20 inches, and install Dunlop 6000 fretwire. All the Steinbergers after that were sent directly to Bill without frets or pickups. These were used on Sand, Secrets and Wardenclyffe Tower" (21, 64b) 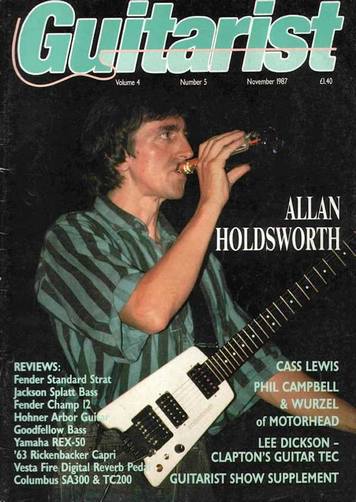 Holdsworth Juice Extractor
Allan himself invented many gadgets for the studio, and one of these eventually became the Rocktron-produced "Juice Extractor":


"I'm sure every guitar player has got an amp that they just plug into and love the sound of - except that it's three hundred times louder than they want it. Or they can't use the processing on it, because the effects send and returns are pretty sad on tube amps, because they're a voltage device. So basically I made this box which you just plug into the output of any amp. It has an output with a volume and a tone control on it. It's a totally isolated output and it plugs into stereo processing or a mono power amp so you can control the volume from zero to whatever. And it captures all of the sound of the original amplifier. In fact, it sounds better to me. It's not like a power attenuator or a power-soak, as such, because that's just like a load resistor and it also involves the speaker, whereas this has no speaker involvement at all. But it does have a simulator inside it because a speaker is like an inductor as well, which changes with different frequencies. I've been using this thing on and off for a couple of years and the version I've got is the final one." (23)

"For live use, the advantage is that you can use any kind of a head - a Fender, a Boogie, a Marshall or whatever - and just come off the output and into the Extractor. It's got eight multiple outs, so you can send and return for eq and gating and make the amp totally invisible to your ears. The outs can be sent to as many pieces of processing equipment as you can afford, and that signal just returned to a stereo power amp via a mixer of some description.

"For recording, I take an amplifier whose sound I really like and put it into the Extractor. Then I take the line out of the Extractor - it has only a line out; there's no output - and feed it into a solid-state power amp. That drives the box that's going to be recorded at an absolutely minimal level, so the speaker's not experiencing any pain, and the cabinet's not experiencing any undue resonance from overloaded air inside it. Plus, the microphones are happy because they're not dealing with huge air excursion. And it's unbelievably quiet. I can get a big, reaming guitar tone on tape, with no noise whatsoever." (25) 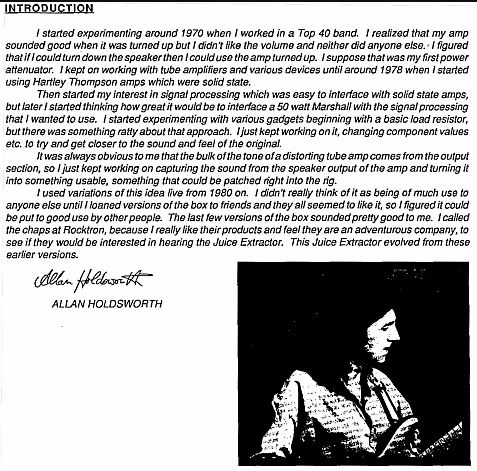 Holdsworth "Portable Speaker Box Enclosure"
Holdsworth had been using Dan Pearce amps since the Metal Fatigue days, but he needed to find an easier way to get a consistent microphone set up for the amp. For this purpose, he came up with an "amp cabinet enclosure" (nicknamed the "coffin"), which made it easier for him to record his amp sound no matter where he was (live, at home, or in a studio).


"Any guitar player knows about trying to get a consistent sound in the studio but it can be so time consuming - you can go in and move the speaker cabinet and the microphone around for a while and still not be happy with it. So I thought 'This is grim!' So what I did was, I made a totally enclosed box that has the microphone and the speaker in it and you can totally change any of the speakers. The baffle slides in and out and I've got loads of different speakers I can put in it - 10's, 15's, 8's, Celestions, Jensons, JBLs or whatever I want to use for a specific sound. It's got a Neumann U87, and a specially constructed stand which I can move, but once I find a sound I like, it's permanently located. So when you go to the studio, you just pick the box up and stick it in the car, plug the amplifier in at one end and plug the other end into the recording console -and you're there! You just cart it down to the studio and, providing the microphone stays in exactly the same position, the sound will stay consistent. I've got three different versions of it; a portable one, a slightly bigger one and a very big one. The very big one sounds the best because it's reduced the resonant frequency of the box to below the guitar's audible register, so it's easy to eq out. " (20,23)

Sand
The album Sand showcases many new sound textures in Allan's songs, largely because the use of synth modules gave him an incredibly large palette from which to work from. As a fan of classical music all his life, it's no surprise that Allan naturally felt the desire to compose with more complex orchestrations. With this in mind, the album Sand makes use of sounds which appear to be futuristic versions and combinations of oboes, flutes, trumpets, choirs, strings, glockenspiels, etc... The songs themselves had less complex structures (less A, A', A'', B, B', B'', etc), but instead had reprises of themes on different instrumental textures (ie - synth patches), for example, on "Pud Wud", "Clown" and "Bradford". This is, of course, a classical orchestration technique, where a theme is passed between different orchestra sub-groups.

In retrospect, I.O.U., Road Games and Metal Fatigue could be said to make up Allan's "rock" period, whereas Atavachron and Sand headed into a more "classical" arena (from a compositional technique standpoint, but not stylistic). There are only two electric guitar solos on the album, but the synth patch for the last SynthAxe solo (on "Mac Man") was actually designed to somewhat replicate the sound of an electric guitar (and this solo is framed by SynthAxe "piano").


"All these things that I dreamed about I can try and have a go at. It's just unfortunate that I didn't find out about it twenty years ago - but that's life!" (23)

The recording of Sand was also facilitated by the construction of Allan's hand-built home studio, the "Brewery", which was equipped with an Akai console. Bassist Jimmy Johnson, drummer Gary Husband ("Sand", "Pud Wud") and drummer Chad Wackerman ("Clown", "The 4.15 Bradford Executive", "Mac Man") were still recorded at a professional recording studio equipped with a 24-track Studer machine, but Allan overdubbed guitar and SynthAxe leads at the Brewery home studio. Aside from recording Sand, Allan also contributed electric guitar (and some SynthAxe) to albums from the bands Soma, Krokus and Jon St James' project. 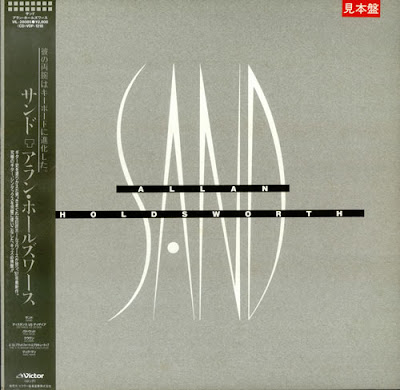 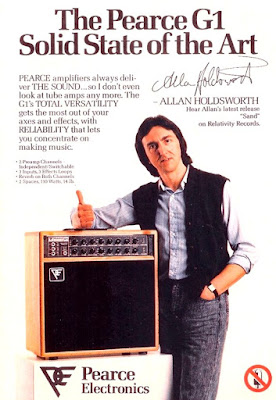 Touring
The Atavachron 1986 tour had Allan joined by Kei Akagi (keys), Jimmy Johnson (bass) and Gary Husband (drums), and began featuring songs from Sand months before the album was released. "Pud Wud" and "Sand" began showing up in the spring, and "Distance vs Desire" made some live sets in the fall. A typical set would have selections from the below list:
Allan also played a few dates as a keyboard-less trio (opening for Chick Corea). At this point, Allan probably began using some pre-recorded synth backing tracks for one or two songs ("Pud Wud" and "Looking Glass"). Fortunately, Steve Hunt assisted on keyboards for these two numbers in 1987 after Allan met him while touring with Stanley Clarke (more about Steve Hunt in the Secrets chapter). Allan's European trio dates featured Bob Wackerman on bass and Chad Wackerman on drums (although he also sometimes sat in with Stanley Clarke's band on a few numbers). More Sand tour dates ('88-'89) included Steve Hunt as permanent keyboardist for the band. Gary Husband soon rejoined on drums for a stretch, followed by drummer Vinnie Colaiuta (Frank Zappa).

Previous Chapter: Atavachron (1986)
Go to the Table of Contents...