Jump to music analysis:
Sunbird
The Things You See

Like Allan Holdsworth, pianist Gordon Beck was an accomplished musician with a strong, personal approach, but also similarly somewhat under-appreciated in his home country. He first established himself with his own jazz trio at Ronnie Scott's in 1965, and subsequently toured internationally with Phil Woods' European Rhythm Machine. In the '70s, he established a successful concert and recording career in France, despite lack of recognition in his own country, England. Beck enjoyed exploring the combination of acoustic piano and electric keyboards (sometimes layered) in his work. A long-running partnership with Holdsworth produced record releases in the '70s, '80s, and '90s, as well Gordon guesting on a couple tours with I.O.U. in the early '80s.

Beck first heard Allan's playing when Holdsworth's first band, 'Igginbottom, debuted in London in 1969. Their earliest stage collaboration was probably a Marquee concert featuring a large-scale jazz ensemble comprised of ‘Igginbottom members, Beck, drummer Tony Oxley, and the Ronnie Scott Big Band (with arrangements by John Cameron, Beck and Scott). In 1972, when Allan moved to London, he and Gordon briefly recorded together as part of trumpeter Ian Carr's "new" Nucleus ensemble, resulting in the album Belladonna. This encounter led them to share the stage on several other adhoc jazz quartet/quintet dates, many of which were broadcast on the BBC. These concerts include a broadcast from 1977 with John Stevens and Jeff Clyne, a 1979 broadcast with Ray Warleigh, and a 1981 concert with Gary Husband (these BBC radio concerts were covered in the previous chapter).

Besides radio concerts, during this period Allan also recorded two albums with Beck, Sunbird (1979) and The Things You See (1980). Sunbird saw the duo supported by bassist Jean-François Jenny-Clark and drummer Aldo Romano, while Things You See was solely a duet affair (mostly acoustic). Later, Allan claimed to have enjoyed playing on Sunbird, but felt that he never became completely comfortable with the tunes until later in their tour.


"The sad thing about that, was that we did the album first. My reading's really bad, and they recorded the album before we did the tour... It wasn't music that I was familiar with, or a style of music that I (was comfortable with at the time)... By the end of the tour, at least I'd figured out how I could work my way through it... (anyways) the more I played with Gordon, the more I enjoyed it, because it was a way to check my own progress." (40, 41, 30)

Allan found the second album with Beck a more relaxing experience, as described in a 1980 interview with the French magazine "Jazz-Hot":

Jazz-Hot: Allan, it's especially for your work with Gordon Beck that the French public knows you well...
Allan: Yes, and it's quite curious, because I've done a lot of things before. And on the other hand, when I started recording with Gordon, I felt quite uncomfortable with this music. I've always been rather ‘jazz-rock’ and Gordon's music had me twisting on a wire. I’m not very happy with what I did on the quartet album (Sunbird)... Our duo record (The Things You See) made me more satisfied. It’s quite paradoxical however, that success came to me with this music that I like very much, but doesn’t quite correspond to my own... - Jazz Hot N° 379-380, December 1980

As Allan's "senior", Beck's playing probably did much to challenge Allan to reach for greater heights in his own playing at this stage of his development (at least in the jazz realm). Gordon recounts their history in a May 1999 interview:


"I first met Allan Holdsworth at the Ronnie Scott Club where he was playing with a strange, but very interesting quartet that nobody had ever heard of ('Igginbottom probably). He decided to stay in London and we put a quartet together with Jeff Clyne and John Stevens. This was called "Plough" and the music was totally improvised. This collaboration was extremely demanding but very exciting at times... I love all the various projects that we have been together on e.g. Sunbird", With A Heart In My Song, None Too Soon, etc."


Musical Analysis: Sunbird
Allan's first recorded collaboration with Beck can be found on the 1977 free improv session (which Beck refers to above) Conversation Piece , but Sunbird, his first record under Gordon Beck's band-leadership, covers much more ground, from textural material to the piano-jazz club tunes Allan had been playing with Beck and Pat Smythe at the time. On the second side, this album also has Allan in some exotic new musical territory (assuming the Glen South Band only tackled more "up-country" material). It would have been interesting to hear how Allan's playing had evolved by the end of the tour on these particular tunes. 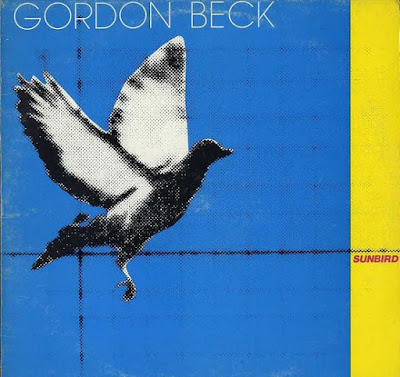 Musical Analysis: The Things You See
At the end of 1979, Allan and Gordon reconvened to record some tracks as a duo. The resulting album release actually has more Holdsworth than Beck songs, but its stylistic direction still hold more of Gordon's jazz-blues than Allan's more iconoclastic polytonal constructions. Nonetheless, this arena seems to have provided some element of challenge for Allan, and he approached Gordon's more "earthly" harmonies with enthusiasm (this relationship would much later culminate in the '90s release None Too Soon, which also featured Holdsworth playing Beck-arranged jazz standards). On the album The Things You See, Allan plays mostly acoustic guitar, with clean electric guitar tones only on the title track and it's alternate vocal arrangement, "At The Edge" (featuring Allan on vocals). Gordon uses a combination of acoustic and electric keyboards, sometimes overdubbing additional layers. 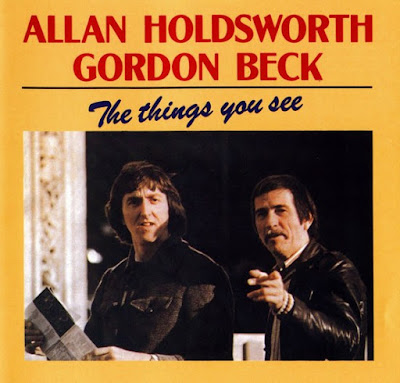