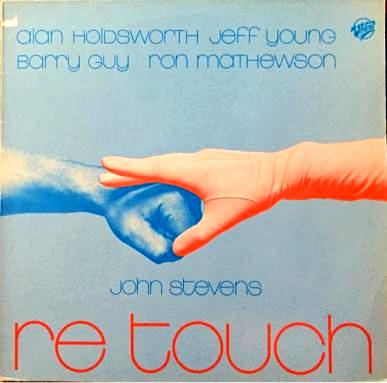 After the end of the 1976 tour with Pierre Moelen's Gong, Allan Holdsworth settled back into adhoc jazz sessions and dates in London with his regular "chaps", such as pianists Pat Smythe and Gordon Beck. During this period drummer Bill Bruford (King Crimson, Yes) saw one of Allan's performances, and engaged Holdsworth to set aside some dates for recording guitar tracks on Bruford's new solo album. However, before the highly-structured Feels Good to Me sessions would begin, in May of 1977 Allan found himself recording mostly non-structured pieces with free jazz (free improvisation) drummer John Stevens.

John Stevens was one of the main progenitors of the European free improvisation genre, in which every member of the band improvised at the same time, with equal weight and importance given to every instrumentalist. Additionally, a general tendency towards "non-idiomatic" playing was encouraged, which generally meant departing from metered rhythms and diatonic harmonic material. Stevens' "Spontaneous Music Ensemble" solidified (perhaps not the most apt word there) in the latter part of the 1960s with such free improv luminaries as reedist Evan Parker and guitarist Derek Bailey among its ranks (at right).

Allan's first exposure to "spontaneous music" was probably his (unrecorded) sessions with Jamie Muir's "Sunship", five years back in 1972 (Jamie Muir would later join graduates of the SME in the Music Improvisation Company). However, Allan's exploration of this kind of spontaneous composition continued well throughout his career (as found in the various "zones", HoBoLeMa, and Chad Wackerman's Dreams, Nightmares and Improvisations).

The first recorded instances of Allan playing free improv are found on a few John Stevens-led piano and guitar quartet albums - not actually labeled with the "Spontaneous Music Ensemble" moniker on the cover, but essentially an SME project. The tracks often seem to be based on very broad rhythmic or melodic shapes (or were possibly edited to be that way), and usually lead to some very dense/inscrutable ensemble interactions. The history of the releases ended up becoming a sore point with Allan in the future, however. 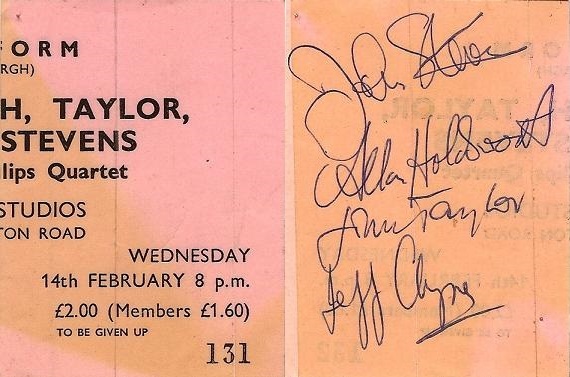 "What we did was, we went into the studio and recorded a completely spontaneous record with Ron Matthewson, Jeff Young and myself. And because it was all "spontaneous music" we all got together at the end and decided which tracks, which parts of those spontaneous pieces were useless - because it was a Spontaneous Music record. So that was fine and was ‘Touching On'. I don't particularly like it, but that's what it was, that's what happened. But then John Stevens went on to license all the other crap, all the outtakes…nobody saw any money for it. Not that it would have mattered, because if he'd asked me I would have said no, because they were outtakes. To me that's what outtakes mean - not useable."  (40)

Musical Analysis:
Despite Allan's later misgivings about these session releases, he recorded or performed with Stevens on several occasions between 1977 and 1979. In general, these sessions somewhat weave stylistically between post-Coltrane free jazz and European free improv, with pianists Jeff Young and Gordon Beck pushing towards more traditional harmony structures.

The most recent of the four Stevens albums is Propensity, this time without a keyboardist. Allan notably here also plays a 12-string acoustic for half of this release, and delivers a wealth of leads on this instrument (last heard on Soft Machine's Bundles ("Gone Sailing")). Out of all four of these releases, I personally enjoyed Propensity the most, since it seems to play to all of the strengths of free jazz without compromise or self-consciousness (although Touching On also features some really cooking boilermakers). However, harmonically, Propensity is mostly thornier than the other sessions, and may be difficult listening for those not accustomed to "free" music.

From a stylistic viewpoint, Allan often plays some very "outside" lines on these sessions (as is typical of the free-jazz genre), and pretty much avoids any tremolo bar articulation. His tone stays mostly in "clean jazz" mode, but a few solos here and there have some more bite. The tracks also offer a healthy serving of Allan's guitar comping style, which probably hadn't been featured this much since the 'Igginbottom record of 1969. Come to think of it, much of his soloing here is kind of a more mature version of his frenetic 'Igginbottom soloing style, as opposed to the more "lyrical" playing he had just employed with Gong (and would soon use in Bill Bruford's Feels Good To Me project).

In terms of Allan's discography, these four John Stevens albums are probably the most challenging of all of his projects for most fans, and are probably best listened to in short, spread out sittings. As Allan attested above, Re-Touch and Conversation Piece are virtually unauthorized bootlegs, and probably (make that definitely) could have used some editing.

Note: The below breakdowns only include tracks in which Holdsworth participated.


Propensity can be purchased at the Art of Life website.

Next: Jean-Luc Ponty
Previous Chapter: Gong
Go to the Table of Contents...