After returning from his stint with Gong, Holdsworth continued playing jazz club dates in London from the beginning of 1977. Drummer Bill Bruford (from the progressive supergroups Yes, King Crimson and Genesis) caught Allan at some of these gigs, and in a 2005 interview with Christophe Coureau, mentions playing an early date with the guitarist:


"...Allan had certainly asked me to play in a pub in Putney (South-West London ) some time around then with Ray Warleigh. Of course, by now I knew enough about his talent to be hugely impressed, and to think that if ever the opportunity arose, if ever I could find a vehicle big enough to contain him, I'd give him a call..."  (77)


Bruford: Feels Good To Me
Bill Bruford composed his first solo album Feels Good To Me during the first half of 1977, with National Health keyboardist Dave Stewart's assistance. Allan and bassist Neil Murray (National Health, Whitesnake, etc..) ended up joining the duo for some rehearsals in May and July. Bill reminisces about Allan's time in his "Bruford" band in his 2009 autobiography:


"Guitarist Allan Holdsworth, like bassist Jeff Berlin, was clearly developing something on his instrument that involved huge leaps forward. There was the liquid hammering-on technique in the left hand, by which perhaps only one in three or four notes are struck, with the rest hammered on, by just hitting the fingers on the frets. There were the spectacular leaps in intervals — Allan had given me Nicolas Slonimsky's "Thesaurus Of Scales And Melodic Patterns" as a Christmas gift, and he was by now a leading authority in the arcane world of palindromic canons, sesquitone progressions, and the like. Allan brought forward this heavy armament, more commonly found in classical composition, as source material for improvisation in rock and jazz groups. There was the whammy bar, more commonly known as the tremolo arm, which invested his work with so much passion. Just as it seemed the notes could go no further, the phrase would spin off into the ether with the crying vocal inflection caused by momentarily altering the pitch of all the guitar strings. There was his sound — a beautiful, passionate thing -  (but) not always readily available: many was the night you could find Allan, soldering iron in hand, five minutes before the audience was let into the hall, wiring together three complaining amplifiers, their guts spilling out onto the stage, solder and screws everywhere."  (90)

Although Neil Murray helped out in these early rehearsals, Jeff Berlin was eventually chosen to take the bass chair on the studio date. Allan had already met Jeff briefly when he and Tony Williams were auditioning bass players for Tony's New Lifetime in 1975 ("He's a killer. He's gonna scare a lot of people. Really lethal." (3)). Jeff Berlin talks about Bruford's intuitive approach below:


"(Bill) played a chord on a piano and there was a note that clashed. The harmony book says you shouldn't play those two notes together. I mentioned that to him and he said 'Well, I like the way it sounds.' That little line absolutely changed my life because it made sense. It was about how I hear it versus how it ought to be." 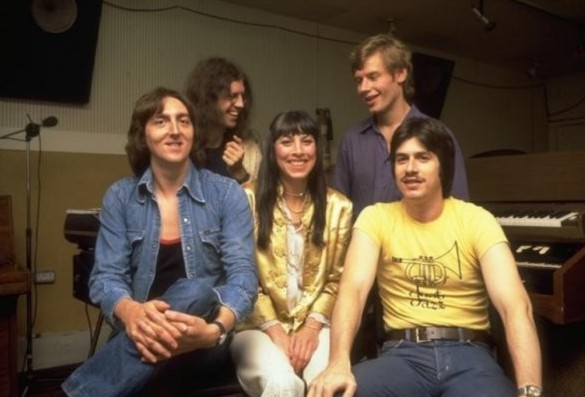 In August (after Allan had returned from completing guitar tracks in Los Angeles for Jean-Luc Ponty's album, Enigmatic Ocean), studio sessions for Bruford's Feels Good To Me began, although the album was basically an assembled studio project, in which Allan overdubbed his guitar onto existing rhythm tracks.


“I had never played a completely overdubbed solo until I recorded with Bill Bruford a few years later. It's so weird, so sterile. You know, you feel like you're outside. But when you do solos live, there's a sort of spirit that's so difficult to get in overdub situations. When a band plays together, everybody interacts. And that feels much better to me. If you make mistakes, they don't feel so goofy as when you overdub and foul it up. I try to listen to everything and cue off of everyone in the band… (so instead) I just listened to what they wanted, and played. It's hard sometimes, because I can get a mental block. It would be a great advantage to read (music) because when you've got something difficult to remember — even if it's only two or three bars — you can look at it and jog your memory. And sometimes I get so worried about remembering something that I don't remember it. The biggest problem, though, is that I can't write anything down when composing a piece.” (07)

Bill explains his reasoning in an "Oor" magazine interview:


"The sound engineer thought we'd gone crazy! We first recorded just the the drums, then the bass, and so on. With our music, it was possible to do that. Since everyone makes mistakes in the studio, if everyone records their parts individually, they can do it as many times as they like. Of course, we first rehearsed the pieces before entering a studio, so we had a clear idea of how the pieces would sound... But next time I think we’ll do it differently."

Allan didn't contribute any songs to Feels Good To Me, but he did have to navigate through some interesting rhythmic meters and lengthy unison ensemble figures (Allan was no stranger to these "tricky dick" parts, as he had written some intricate rhythmic parts on "Velvet Darkness" ("Karzie Key") back in 1976).

Feels Good To Me: Musical Analysis:
This album sets the stage for some of the more structurally-complex music Allan would be involved with in the late '70s. Balancing out the technical prowess on display would be Annette Peacock's poetic, "sprechstimme" vocal delivery, with her voice becoming elevated to that of an alluring 'siren' by the climactic end of the album. From a stylistic viewpoint, Allan's solos seem to have retreated just a bit from the iconoclastic tremolo bar articulations he had achieved on the Gong Gazeuse! album, which may also be due to the more demanding natures of Bruford's rhythms and harmony structures. Allan be seen playing a red Gibson SG for some of these songs in the 1979 "Rock Goes to College" video (top of page), so that may have had something to do with it as well...


No touring for "Feels Good To Me" really followed (besides one February 1978 performance on The Old Grey Whistle Test), since almost immediately (near the end of 1977) Eddie Jobson and John Wetton began the formation of U.K., which would soon have Bill and Allan as charter members.

Next: Anarchy in (the) U.K.
Previous Chapter: Jean-Luc Ponty
Go to the Table of Contents...